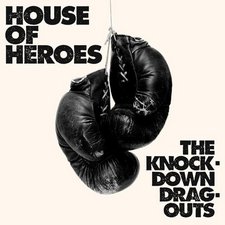 House of Heroes
The Knock-Down Drag-Outs

The four-piece rock band from Columbus has had quite a successful run the past few years. Their past three full-lengths have all been met with critical success and had a consistent presence on numerous "best of" lists. Between each new album, House of Heroes has put out a couple unique EP's and singles, keeping fans satisfied until the next major record. The Knock-Down Drag-Outs essentially collects the majority of these secondary releases, then throws in a handful of new pieces as a cherry on top.

The hefty 19-track collection, in actuality, only contains five brand-new items, two of which are remixes. The first new song, "Choose Your Blade," is perhaps the biggest deviation we've heard from the band. House of Heroes takes the hard rock sound they're known for and blends it with a heavy Spanish influence. From the music to the occasional drift into Spanish lyrics, it's a fun and upbeat song that fans will surely love. The next new track, "Hide," showcases the band's soft side. With the soaring and powerful choruses that Tim Skipper and company usually belt out, it's impressive to hear them evoke just as much emotion in an understated fashion. The final new song is "Your Casualty;" it's not a bad song by any means, but it's definitely the weakest of the three newbies. Remixes of "Remember the Empire" by Family Force 5 and "Suspect" by McSwagger can be found at the end of the album. Both songs change rather drastically from their Cold Hard Want versions, with "Suspect" particularly being almost unrecognizable.

The rest of the collection is comprised of EP's, singles and bonus songs from the past five years. This is a convenient, all-in-one package for any fans that may have missed the press announcements or didn't buy a particular CD from a particular store. The album opens with the quirky, "Dead." This energetic rocker was originally released alongside the "Touch This Light" single. The guys' fun sense of humor continues with the 2011 Halloween single, "Lovesick Zombie." The digital-only bonus tracks from Suburba and The End is Not the End are next in the lineup. "Galveston" contrasts an upbeat tempo with spiteful lyrics about a failed relationship, capped off with numerous exclamations of "I was right." "Patience" slows things down dramatically with an ambiguous love song. "And I see you, And I know the truth I still want you, You are the grace that I believe in." The Acoustic End EP and the fairly straightforward Meet the Beatles EP comprise the next chunk of music. "Ghost" is arguably the best, and most heartbreaking, story you will ever hear on a House of Heroes record. It follows the story of a man falling in love and finding success, only to have it all come crashing down. It's a vivid and striking story that will stick with you long after the song ends, "And that's what hurt the most, I saw it in her green eyes, She had seen a ghost." A decent DC Talk cover and a medley of the gang vocals from Suburba round out the set.

The decision to purchase this digital box set or ignore it will depend on what you already have in your catalog (However, it's also available on a physical CD too). For most, this will be an album where you buy individual tracks from the digital music store of your choosing. For the more casual fans that don't already own the EPs, this is a treasure trove of excellent music that shows elements foreign to any of the Buckeye quartet's full-length albums.

The big flaws of b-side projects are obvious; most of these songs are available elsewhere, and they play out more like a playlist on shuffle than a single cohesive project. But one can't really hold that against a project like this because the band simply wants to make these songs easier to get and they aren't trying to make any sort of artistic statement. Such is the case with House of Heroes and their new b-side project, The Knock-Down Drag-Outs. Indeed, those fans that already have previous projects like The Acoustic End EP or House of Heroes Meets the Beatles will be less inclined to get this project since it contains both those releases in their entirety (not to mention that nine of the songs on this album were released on the Suburba preorder bonus EP The B-Sides). And the tracks "Galveston" and "Patient" ought to be familiar to those that purchased the digital version of Suburba. Plus, "The Voices of Suburba" (an a cappella mix of all twelve songs on Suburba) is available as a free download on HOH's Facebook page. But the real winners of this project are the three new songs; the rocker "Choose Your Blade," the ballad "Hide," and the dark, worshipful "Your Casualty." Due to musical and thematic similarities, I speculate that these songs were written at the same time as Cold Hard Want and ended up being cut, so it's great that the band put them out so we can finally hear them. Another winner is HOH's inclusion on the 2006 album Freaked! A Gotee Tribute to dc Talk's "Jesus Freak", "Day by Day," a track probably long forgotten my most, and a great reminder of the band's faith. And then there is the fan-favorite "Dead" from the Touch This Light digital single. And while I personally am uninterested in dance/party remixes of well-known songs, I do know that many will also love such remixed versions of "Remember the Empire" and "Suspect."

Let's be honest, b-side projects are a "can't-lose" situation for any band as beloved as House of Heroes. And then when said b-side project contains nineteen tracks and nearly seventy minutes of the phenominal alt-rockers we know and love (including the three new songs and two new remixes), even those that already have many of these songs will think it is worth the double-dip. And indeed, The Knock-Down Drag-Outs is one collection that rivals similarly-beloved releases like Anberlin's Lost Songs and Relient K's The Birds and the Bee-Sides. - Mark Rice, 4/28/13