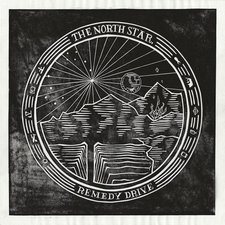 
Nebraska's Remedy Drive (who now reside in Nashville) have been slugging it out on the periphery of the CCM and indie world for more than a decade now, but with their terrific and convicting new album, The North Star, it's clear that those days could soon be behind them. Their new album brims with righteous fury and fiery denouncements of the powers that be, like an Old Testament prophet testifying outside the gates of the city. It's a call to action set against a modern rock backdrop of stuttering beats and icy, piercing guitar lines, like a 60's era Bob Dylan being backed by Mutemath or Paper Route. The band has been in the trenches of the anti-human trafficking movement for many years now, and The North Star is a honest cry against that evil, and so many other fallacies that bedevil our modern day culture.

Opening number "You Got Fire" finds front man David Zach calling for action alongside CCM veteran Rachael Lampa, with a rhythmical flow that is immediately gripping. With a dense lyrical delivery, Zach calls out to any listener who's "got ears to hear." Lampa's compelling vocal hook lifts the song to compelling heights. Zach's vocals bring to mind a more awake John Mayer, and his voice fits nicely alongside Lampa's diva-like wailing.

But it's track two and beyond where Remedy Drive really start to "meddle" with their Evangelical listening base. "Warlike" takes direct aim at the Military Industrial Complex (those who profit from war and conflict) in a scathing takedown worthy of Rage Against The Machine, but here done with one eye on the Prince Of Peace. "Keep your oil fields and your war machine / must we be the first and the strongest / industrial military complex / you can't take the profits out of context / you can't love mercy if you love conquest / it's just smoke and mirrors / they're just stoking fears." When was the last time you heard a band that is still played (once in a while) on Air1 go after war profiteers and the too-often tendency for the Church to line up with militaristic nationalism? Great stuff.

But it's the album's third track, "Brighter Than Apathy," where the band makes its grand thesis statement. Against a slowly building and cascading guitar and keyboard line (straight out of the U2 playbook), Zach slowly and rhythmically unspools a treatise on fighting for something meaningful. "I want to live for something bigger than me / stronger than fear / brighter than apathy / trade your caution in for courage / give me actions / not just words / one spark catches a fire / one voice can become a choir." Clocking in at more than seven minutes, and featuring an African choir towards the end, "Brighter Than Apathy" is a tour de force of a song, and one of the best call-to-arms put to music in many years. Mixing the sonics of Peter Gabriel with the passion of Switchfoot, the band has delivered perhaps their best and most grand song to date.

The band directly references their work in anti-human trafficking in "Sunlight On Her Face." By listing notable women of the Bible (Rahab, Mary Magdalene, the Virgin Mary) and putting them alongside stories of contemporary women in Syria, Cameroon, Thailand and Uganda, the band slams home the point that the Lord cares very much about women, and that they are a treasure worth fighting for. In this "year of the woman," that is a timely and timeless message indeed.

All these grand statements lead to the band's somber and electronically chilly take on Bob Marley's classic and poignant folk protest anthem, "Redemption Song." The band's bold re-interpretation of this beloved song is a bold and brilliant move. Zach's slow and soulful delivery of Marley's classic plea for peace and the brotherhood of man is a needed breather in the album's track running order.

And speaking of dreadlocks, the one and only Propaganda (winner of JFH's Album of the Year last year in their annual Staff Picks) takes a verse in "Sanctuary," a modern day take on the Underground Railroad, and a plea for those who are in need of sanctuary. In fact, the album's title comes from the directions that southern slaves were given in their perilous journey north to freedom (They were to look for the north star each night).

The North Star ends with "Disappear, a plea for the Lord to be near in the midst of all the sorrow and evil in the world, and to give strength to keep on fighting when the desire to be complacent is ever-present. This version of "Disappear" is a new recording of the closing track from their 2011 EP, Light Makes A Way EP.

Dealing with huge themes (human trafficking, militarism, nationalism, consumerism, war mongering) within a Christian context is rarely done this well, and this tunefully. Remedy Drive's sonic template here suggests a slightly lower budget Coldplay or Radiohead, but the combination of a powerhouse message against the backdrop of gorgeous and urgent songwriting makes The North Star a contender for best album of the year. There is a vital need for Old Testament style 'speaking truth to power' in these confusing times, and Remedy Drive has crafted an epic, challenging and heart-breaking record to do just that.