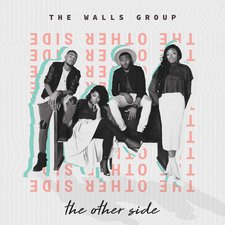 The Walls Group
The Other Side


Familial vocal quartets certainly aren't as popular as they used to be, but they all tend to have a sense of inter-relational closeness that is both inexplicably heard and felt. That is definitely true of Rhea, Ahjah, Darrell, and Paco Walls, and it's what makes The Walls Group's The Other Side an energetic listen. This talented bunch of siblings aren't afraid to show off their ranges, but this ability is also what contributes to the album feeling overlong and stylistically over-stretched.

As is the case with most contemporary gospel groups, the vocal and instrumental performances are absolutely top-notch. The aptly-titled "Good" proves this point especially: the five-minute span of funk doesn't grow old, and it allows for everyone involved to flex their musical muscles. Additionally, songs like "The Prayer" feature the quartet at its most emotionally powerful, which are definitely the most special moments of the record. At the same time, the focus on theatrics occasionally takes away from the meat of the tunes. Upon further digging, it becomes clear that both the lyrics and song structures aren't particularly fresh or inventive (i.e. "And You Don't Stop" and "Mercy"). Of course, the emphasis on performance seems to be the point for the majority of the runtime, but it detracts from replayability.

In addition to the style over substance factor, there's also a major component of quantity over quality here. There is R&B, 90s worship rock, funk, piano shuffle, cheesy 90s electro-pop, ballads, hip hop, pop/rock, and even a worship anthem in the mix. Variety is normally much appreciated, but the issue here is that each song fits squarely into one of these labels, not doing enough (outside of the performances) to make it feel distinct from other songs of their respective genres. It's also quite noticeable that some styles fit the quartet better than others - the rapping on "Mercy" feels out-of-place, and the final stretch of the album's enchantment with pop/rock is a bit strange. Fans will undoubtedly cling to the genres that appeal to them more (even the NSYNC-esque "Don't Cha Stop" will be liked by some), and there is something to be said about providing a little bit of everything so that everyone will find something to like.

There are a few gems, such as the uplifting acoustic ode "Count On You," that stand out from the rest of The Other Side. There's certainly enough here to enjoy and feel good about. Still, the album suffers from attempting to traverse too much musical ground. It comes across as more of a resume than a cohesive experience. The Walls Group has got skills, so now that we all know it, hopefully their next release will have more of a centralized theme.