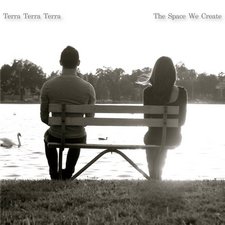 It's been quite a while since we last heard from Terra Terra Terra. In 2009, they released their freshman album, Mind Like a Man, Soul Like a Child, in the hopes of becoming the new Anberlin or Copeland of the Christian rock scene. That never panned out, as the album was pretty lackluster for the most part. Now four years have passed and we finally have new material. Fortunately, The Space we Create shows a lot of improvement for the band.

If you come to this album expecting more indie-influenced modern rock, you certainly won't be disappointed. It's no coincidence this band has played up the fact that they're from the same state as Copeland, as their influence is all over this album. Frontman Loren Taylor eagerly reaches into his falsetto whenever possible, although his voice has a lower tone than Aaron Marsh. He also seems to have taken his vocals down a notch from the previous album. Additionally, Taylor's delivery frequently reminded me of Daniel Castady of The Fold. Instrumentally, there's some definite similarities to indie darlings Deas Vail, although the sound is bigger and less controlled. There's an abundance of U2-esque shimmering guitar lines, big chords, and drummer Tyler Soucey can't seem to get enough of his crash cymbal. The overall production aesthetic is best described as just a big wall of sound. Unfortunately, this aural assault occasionally seems unnecessary, and the general noise sometimes distracts from the vocals and melodies.

Speaking of big, the songwriting on this album is clearly geared toward creating dramatic anthems. For the most part, it's a success. It would be hard not to be moved by the building crescendo of "Someone Like You" (thankfully not, as I initially feared, a cover of the odious Kings of Leon song) or the soaring sensitivity of "Better than Screaming." At the same time, some songs just aren't as effective as they should be. While they try to hit the right emotional notes, they sometimes seem too formulaic or generic to make an impact. "The Only One" is a prime offender, although it is partly redeemed by a nice guitar line in the bridge. "She Was... Disarming" suffers a similar problem, and is also at least the second most pretentious title on the album. Meanwhile, "The Thing Is, I'm Never as Good as When You're There" mostly just takes up space and fails to contribute much. All that being said, it would be hard to end an album better than they did here with the title track. It starts out as a contemplative love song, happily missing the raucous production of previous tracks, and builds and builds into a huge culmination with an absolutely infectious and grand gang chorus.

Terra Terra Terra have set themselves up well with The Space we Create. There's clear growth from their first album, and the songwriting has more direction and impact. While some tracks are more overwhelming than anything else, there's also plenty to come back to. There will be bigger and better albums released this year, but this one certainly deserves a listen.

Last time around, the boys of Terra Terra Terra forged their debut Mind Like a Man, Soul Like a Child with wacky synthesizers, muffled vocals, and an overall unmemorable indie rock sound. But that was 2009, and 2013 finds the band back with a refocused musical vision on The Space We Create. The good news is that TTT have forsaken the goofy loops and occasional dancefloor mentality and have settled on a guitar-heavy sound that's full of possibilities. With this concept, there are several solid tracks on The Space We Create that keep the listener's interest all the way through ("Angel," "Away For A While," "The Only One"), though that's where most praise for the album stops. Despite the small improvements TTT have made in their instrumentation, there are still too many elements in the way that keep their potential for excellence at bay. Loren Taylor's vocals, once again, get undeservingly lost in the overpowering guitars and cymbals all too often. He's heard loud and clear before the music ramps up, and his voice just doesn't mix well with the grunge/garage rock hybrid TTT is going for. As a result, any insightful lyrics get muddled in the shuffle with plenty of nuanced artistic statements the listener ends up missing. While The Space We Create struggles quite a bit, it's still a step up from their debut, albeit a small one; with better production value and balance in the levels (and perhaps a less awkward album cover for polish), Terra Terra Terra can build their artistic ambitions on solid ground. - Roger Gelwicks, 1/13/13