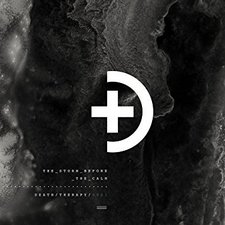 Death Therapy
The Storm Before The Calm


Becoming the Archetype took a step back after Jason Wisdom left the band, but fans of Wisdom's growl can now rejoice with his new project, Death Therapy. Death Therapy (a reference to the movie What About Bob?) is an animal you likely haven't seen before: Wisdom rocks the bass hard and heavy, but no other guitars are present. That's right -- It's a metal band with bass, drums, and synths only. The Storm Before the Calm is some seriously dark groove metal with a lot of synth and industrial influences. The best part is that, other than the obvious lack of solos or guitar leads, most listeners would never be able to guess the band is bass guitar only. The vast majority are just going to notice a metal band with heavy music that knows how to groove. Thematically, Widsom is looking to honestly share his hardships, struggles and depression -- the storm -- while at the same time, showing hope in Christ -- the calm.

"Until Then" starts the album off with a short and soft intro track to prepare the listener and give a little taste of the industrial/synth flavor to come. The first full track is the Andrew Schwab-featured "Self Mind Dead." The song actually feels more like a Project 86 song -- especially something you might have heard on Rival Factions. It's a solid jam that P86 fans will likely dig, but the full intensity has yet to build. "The Lie" is the first taste of the metal you'd expect from Jason Wisdom. While there are synths playing throughout, the music is heavy and Wisdom's growl comes out as expected from Becoming the Archetype fans. "Wake Me (When I'm Dead)," like "The Lie," is a song that embodies what Wisdom was trying to accomplish thematically. Wisdom sings, "Give me rest; give me peace. Give me strength to face the days of my unbelief," before growling, "Wake me when I'm dead!" While there has been plenty of electronic instrumentation at this point, "Prodigal" is truly an industrial influenced song. From the sampled voice intro, to the synth-soaked music, it's a great jam. The best part has to be the slight breakdown and modulation starting at the 2:36 mark. Aggressive blasts lead to a complete drop in the music, followed by a drum fill leading into the music at a slightly higher key before smoothly walking it back down for the finish. "Slow Dance (With the Dead)" is absolutely one of the best tracks present on the album and by far the slowest. While it's far from a dead ringer, the verse shares some similarities with Marilyn Manson's "The Dope Show." However, it has a much different feel in the breaks (there is no true chorus) and the bridge gets much heavier. The strong industrial sound returns for "Possessed," which is about how the Holy Spirit "possesses" us and continues to work in our lives to grow us. Widsom sings and screams about his human nature to want to give up, "Still I fight the process, longing to remain. If it were up to me I would stay the same," but counters with "But it's not up to me and that sets me free. I rest in knowing that though I am a mess, I am possessed!" "Everything Burns" is the final track with lyrics and has a very apocalyptic feel. "The Belmont Family Curse" (a reference to the Castlevania II video game) is a two-part, two-track, instrumental. "Part 1 (Night)" is the shorter intro with a more standard feel, but "Part 2 (Day)" is a super cool and unique, grooving 8-bit featured instrumental. The tracks were put together with the idea of Castelvania II, which switched game play from day to night, in mind and the 8-bit "Part 2 (Day)," in particular, was to pay homage to classic video games.

If you are looking for Becoming the Archetype 2.0, you're looking in the wrong place. However, if you were a fan of Jason Wisdom's creativity, bass playing, and vocals, look no further. It's few and far between that you will find an album quite like this one. It honestly sounds like a lot of things, but it's very hard to classify it as one. Perhaps the best way to describe it is simply by saying it's heavy music with electronic highlights and industrial influences. While inferences to artists like Marilyn Manson will undoubtedly surface (especially due to the early popularity of "Slow Dance (With Death)," Jason Wisdom has put together something truly unique, innovative, and just flat out awesome. It's still very early in the year, but Death Therapy already has potential to not only be a top heavy album of the year, but be in the running for best overall album of 2017. Heavy music fans will want to pick this one up as soon as possible.

Death Therapy, the newest project by metal veteran Jason Wisdom, could not have come at a better time. Refusing to accept redundancy, Wisdom continues to tread the unfamiliar path that was born from albums such as Dichotomy and the eschatological Celestial Completion. The Storm Before The Calm is another beast altogether, showcasing its identity through a dark, industrial sound that's driven entirely by bass and percussion. Soaked with addictive grooves, synths, and gothic influences, the album is an unabashed look into the depths of the human soul. Yet, despite its moody sound, the album never wallows in depression, choosing instead to contrast it with the hope we have in Christ. Lines such as "I'm making all things new, and it starts with you," featured at the end of "The Lie," and "But it's not up to me, and that sets me free, I rest in knowing that though I am a mess, I am possessed," from "Possessed" are important reminders I feel the majority of heavy music has abandoned today. Overall, The Storm Before The Calm is a terrific album that has exceeded even my highest expectations. If you're a fan of Jason Wisdom or enjoy the darker aesthetics of artists such as NYVES, this is highly recommended. - 3/1/17, Lucas Munachen of Jesusfreakhideout.com

A lot of people, myself included, have gotten more and more underwhelmed with heavy music in the past couple of years, particularly with newer acts. It's been difficult to find something that engages the listener, unless you're just generally not a hard person to please. But finally, we've got a new act from a familiar face that is changing that. Jason Wisdom's Death Therapy is here, and it's a unique breath of fresh air. The Storm Before The Calm has a dark, industrial metal feel that feels fully fleshed out and very heavy despite the lack of guitars. "Wake Me (When I'm Dead)" and "Slow Dance (With Death)" are immediate jams, and the two-part, NES-inspired "The Belmont Family Curse" tracks are a great tribute (particularly "Pt. 2"); however, at only ten tracks overall, I may have liked another actual song or two. Regardless, Death Therapy's debut is a must-have for metal fans looking for something fresh. - 2/26/17, Scott Fryberger of Jesusfreakhideout.com

Heavy without overwhelming, foreboding and melodic at the same time, Death Therapy won over this reviewer--who normally avoids this genre like the plague. Songs "Self Mind Death" and "Slow Dance (With Death)" are in the running for my top songs of 2017! - 5/15/17 Josh Balogh

This uniquely atmospheric album is purely bass and synth driven, and yet it's so hard-hitting, you'll find it hard to believe no guitars were used in its production. The lyrics are honest and poetic, but the music at times feels a bit repetitive. Still, you'd be hard-pressed to find another album like this anywhere near the Christian market, so for that fact alone I recommend it. Jason Wisdom channeled his emotional turmoil in creating this album, and while there are some fun musical moments present (the hand claps in "Self Mind Dead," or the Nintendo-esque closer "Belmont Family Curse Pt. 2: Day"), this album leans mostly toward the dark and dramatic. I do advise a small level of caution for listeners going through depression who feel inclined to pick this one up. Sonically, fans of Project 86, Love and Death, White Collar Sideshow, and The Echoing Green should find plenty to enjoy here. - 3/13/18 Nicole Vacca