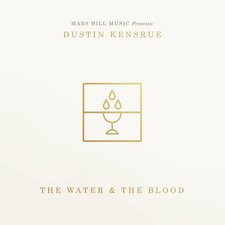 Dustin Kensrue
The Water & the Blood

Dustin Kensrue, lead singer of mainstream rock band Thrice and worship leader at the Bellevue, Washington campus of the Mars Hill Church, is releasing his third solo album. The record, entitled The Water and the Blood, is a mix of styles. Some sounds may be comparable to songs on Thrice's Major/Minor, others are folksier, and some carry an alternative/southern rock sound that may bring Kings of Leon or Needtobreathe to mind. Kensrue's first worship album is an effort that is likely to bring pleasure to many ears.

"Rejoice" gets things started in a more typical modern worship fashion. Musically, the song features drums, acoustic and bass guitar on the verses, followed by a driving rhythm with piano and slight overdrive on an electric guitar on the chorus. While the track probably won't land on your "top songs" list for this release, it is an admirable start. Kensrue steps things up a notch with his complete overhaul of the hymn "Rock of Ages;" the album even gets its title from a line in the first verse. This re-imagining has a new rhythm, an added chorus, and a slightly more modern vocabulary. Kensrue further manipulates the original by making the fourth verse into a bridge. The chorus cries out passionately, "Rock of Ages no one takes Your life, yet You died that I might live; costly grace You freely give. Rock of Ages, You have paid the price. You were cleft to cover me; let hide myself in Thee." After a couple more solid songs in "Suffering Servant" and "My One Comfort" (especially the former), things shift back to the more traditional. "God is Good" plays off the old saying, "God is good all the time; all the time God is good." This one definitely has a feel for congregational worship more than anything.

After this, the album really doesn't suffer any further hiccups (until the end). "The Voice of the Lord" is a solid rocker that begs for you to sing along, "We cry glory, glory; we hear His voice and we cry glory," in the chorus. The best rock tune on the record is immediately followed by what is probably the best overall track; "It's Not Enough" is a powerful song that is sung with deep, convicting passion that continues to build as it progresses. Kensrue's lyrics focus on the fact that no matter what we do individually, it's simply not enough to be worthy of Christ (Romans 3:20-26). Dustin sings, "It's not enough. It's not enough. I could walk the world forever till my shoes were filled with blood. It's not enough. It's not enough." From here, the album goes to two more solid tracks in the slower "Come Lord Jesus" and the slightly more rocking "Oh God." The album then finishes with the somewhat out of place "It Is Finished." The upbeat song features a keyboard line that repeats throughout and doesn't seem to fit the musical feel displayed in the rest of the songs. It is definitely served best as the closer and seems to be more towards the traditional church worship end of the spectrum.

The Mars Hill Church has made some excellent choices in their musical leadership roles and in turn those choices have released some excellent material to the masses. BEC, who is known for releasing worship material, has done well to partner with Mars Hill. BEC's otherwise somewhat tired roster has seen a huge boost from artists like Kensrue, Ghost Ship, and others. Dustin Kensrue has crafted a masterful album that is fairly diverse and creative. While some of the creativity suffers on songs that seem aimed for corporate worship, they still don't come off as the same words repeated in a different order like many other artists offer up. And honestly Kensrue is a worship leader now; it should be expected that he is going to write some songs intended for corporate worship. While he uses many of the traditional concepts lyrically, he retells them in a slightly different light. The Water & the Blood is a definite must-have for someone longing for a deeper, more personal worship experience. Musically, it may be unmatched in recent years and lyrically it won't leave you bored, but instead will fuel your desire to worship God through song even when you're not at church.

Aggressive. Passionate. Biblical. These are words that really sum up the latest Mars Hill Church release from the well-seasoned, former lead singer of Thrice, Dustin Kensrue. The collision of hard-hitting alternative rock with worship songs of the church, make The Water and the Blood, more than just another album but an incredible experience.

Some amazing songs for Sunday gatherings are present, such as "Rejoice," "My One Comfort" and "Come Lord Jesus." "Grace Alone," however, takes the cake for worshipful tunes from the album. It's written in a very hymn-like manner that seems to dig theologically deeper with each verse. This is not technically a new song for Kensrue as many Mars Hill Church bands have covered it, but the song has a richer quality with the writer's gritty signature sound. The first single from the album, "It's Not Enough" is seriously impressive. While not a worship song by any means, it is deeply rooted in scripture, gleaning much of the theme and lyrics from Ecclesiastes. It is lyrically dark in nature but really shines some light on the human condition of sin, especially as Kensrue screams, "It's not enough, it's not enough. I could walk the world forever till my shoes were filled with blood. It's not enough, it's not enough!" Combining these honest words with dramatic climaxing music makes this song magnificently convicting and awe inspiring.

The Water and the Blood really shows excellent examples of, as Kensrue put it, satisfaction and grace. It's balanced with singable melodies and attractive music that can capture the attention of Christians and non-Christians alike. Not only will this album appeal to fans of Thrice, but to anyone looking for a more assertive worship sound that isn't filled with fluffy and cliché-ridden lyrics; as one person put it, "Dustin's lyrics are like bringing a bear to a fist fight." He most definitely did that and no doubt can call this album a TKO. - Ryan Barbee, 9/29/13