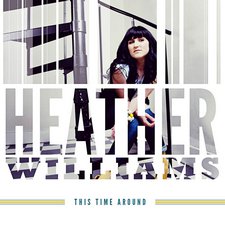 Heather Williams
This Time Around

Heather Williams, a fairly new addition to the Fair Trade Services roster, is a woman who has known heartache far beyond her years. Growing up in the midst of extreme poverty and abuse, fighting addiction and depression as a teenager, and losing her first child shortly after his birth have all left marks on her life, but she also knows, beyond her past and future, that there is great peace and joy in being rescued by the love of God. Last year, her self-titled EP made the first introductions and earned her a spot on Billboard Magazine's "Best Bets of 2011" list. Now her full-length debut This Time Around expands on her story in a brisk collection of hopeful pop-rock songs that she describes as a glimpse into her "conversations" with God.

The standout quality of Williams' work is her voice, strong and clear enough to assume a rock 'n roll attitude just as easily as it embraces a heartfelt ballad. She lays all her emotion out with intense confidence in the catchy opener "Beautiful Thing," setting the tone and theme for the record. "This is a song for the broken hearted / Two time loser kicked out in the cold," she declares with a swaggering rock vibe while delivering an unconventional prayer of "Fix me, fix me / I wanna be a beautiful thing." Contrast that with her introductory single "Hallelujah," a simple piano ballad with straightforward lyrics that reveal a prayer of desperation before exploding in a proclamation of grace. There are no disguises or platitudes as she sings, "Wipe the dirt off my face / Hold me in your embrace / Your love always saves the day," and no denying that she honestly lives and believes it. These two tracks are the heartbeat and highlight of her music and show off her toughness and vulnerability in equal measure.

From there, the album plunges ahead at a quick pace and revisits similar hopeful themes. Other highlights are "I'll Take it from You," a big ballad that uses a synth/piano base to evoke a current pop sound, and "This Time Around," a track that evokes the edgier pop sound of the 80s. "Holes" has a lilting, melodic quality, opening with the evocative image of "Holes, holes in my shoes / Wearing out these feet of mine," and shows what she can do with the soulful side of her voice. There are a few sunnier tracks, like "God is Still God" and "You Are Loved" that might have even more mass appeal among Christian music listeners, but they don't quite hold the same weight and power as her bolder songs. Williams is at her best when she can set her powerful voice free, as if channeling years of hurt and hope into a liberating three or four minutes of music.

At its best, This Time Around celebrates personal redemption in a fresh, powerful way and unveils her talent and passion. Though not a perfect record, it boasts a number of standout songs that set her apart in the CCM scene and reveals an artist with lots of future potential. For those looking for anthems of overcoming or something fun to chase the darker days away, this debut is worth checking out and establishes Heather Williams as an artist to watch.