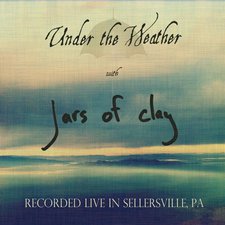 Jars of Clay
Under the Weather: Recorded Live in Sellersville, PA - EP

On October 16, 2011, Jars of Clay performed a pair of shows at the Sellersville Theater 1894 in Sellersville, PA, as part of their acoustic Sing & Tell Tour. The tour boasted many fan favorites accompanied by some stories from the band about these songs and their origin. On this particular autumn day, the band planned to capture the second of the two shows on video for a special DVD release for the near future. However, the end result wasn't exactly what they expected and so the DVD never saw the light of day. As a bit of a compromise, and while fans get ready for the band to release a brand new studio project later this year, Jars of Clay is self-releasing selections from this concert date in EP form, Under the Weather: Recorded Live in Sellersville, PA. It's a strictly digital release, with 6 tracks hitting iTunes and AmazonMP3, and those songs being accompanied by three bonus videos and an unreleased track from the upcoming album, titled Inland, being available exclusively from JarsofClay.com as a Deluxe Edition.

For the audio portion of the project, the music is largely acoustic based. On the tracks that appear on Under the Weather, it's mostly just the core four Jars of Clay members, who provide vocals, guitars and keys, with vocalist Dan Haseltine often providing a kick drum to add in a beat. For "Worlds Apart," cellist Emily Nelson joined the band to add the necessary fifth element for the emotional track. Compared to previous live projects (Stringtown from 1997, Furthermore from 2003 and Live Monsters in 2007), Under The Weather may be their most minimalistic live project yet (at least, in front of an audience, that is. Their 2010-2011 Live At Gray Matters EP series was their most minimalistic). This EP includes six songs from what was otherwise a lengthy set, opening with "Weapons" from The Long Fall Back To Earth, and including cuts from their most recent studio project The Shelter, their 1997 album Much Afraid, their 1995 self-titled debut and their 2006 project, Good Monsters. The mix is pretty fair for fans of different selections in their catalog, but anyone who knows just how many songs they played on this tour (and on this specific night in particular), may be surprised by this. The band has offered a lot of EPs in recent years, so truncating a generous set like this one to just six songs is a little disappointing (And, honestly, they're kind of due for a full-length live album). We attended the first set of the pair of shows on this evening and, at that show, they played 22 songs in total. Missing from this EP are such gems as "Liquid," "Work," "Something Beautiful," "River Constantine," "Closer," "Headphones," "No One Loves Me Like You," "Much Afraid," "I Need You," "Water Under The Bridge," "Shelter," "Flood" and even more! ("Flood" does make an appearance in the JarsofClay.com exclusive version in video form only, however.) To the blissful listeners who don't know what they're missing, however, Under The Weather is a wonderful example of just what modern day Jars of Clay brings to any one of their live performances.

There's little to harp on with Under The Weather beyond missing most of the night's song selection, but if there was one musical drawback, its found in this recording of "Frail." While it's actually otherwise one of the best recordings of the song, there's a strange, high-pitched digital sound that plays in the background throughout the duration of the song. I didn't notice it the first time I heard the song, but during the second listen, it stood out so much that it became grating. It's unfortunate, too, because the song is a classic that harkens back to the band's debut indie project, Frail almost twenty years ago. Haseltine provides an electronic beat and additional effects for it, giving it a unique update. On the flip side, one of the band's best songs in their repertoire makes a grand appearance in "Worlds Apart." And with Nelson's provided cello accompaniment, it's easily a standout on this EP. More rock-based songs like "Weapons" and "Dead Man" make the conversion into the acoustic realm quite well, while the band clearly has a load of fun with "Eyes Wide Open" from The Shelter.

While we're waiting for Inland to venture out for its debut, Under The Weather is a great reminder of why we love this band so much. While a six-song live EP may have been a little more satisfying had it been padded with a few more of the selections that night, fans can still get their hands on some great takes of their favorites via this EP. And be sure to grab it from their website to get the exclusive extras -- the bonus song, "Love In Hard Times" (which has a bit of a mellow, classic Jars meets Good Monsters-era feel to it) is showing signs of some exciting things to look forward to on the forthcoming new album!