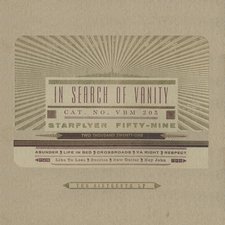 
It would be tough to think of a more humorously ironic album title than that of Starflyer 59's sixteenth full-length album, Vanity, because Jason Martin, the singular force behind the band's incredible 27-year run, is probably the most modest and unassuming musician I've ever met, self-effacing and introverted almost to a fault at times. In his early 20s, his affection for noisy shoegaze and wall-of-sound guitar feedback gave us two of the greatest albums of the 1990s alternative era, Silver and Gold (the latter of which, full disclosure, is my favorite album ever). The wailing noisy guitars got cleaner and Jason's always-present sense of melody began to translate to an elevating beauty on Fashion Focus and Leave Here a Stranger, before the sadness and melancholy of midlife and the death of his father framed Talking Voice vs. Singing Voice and Dial M.

I've named just six of the fifteen previous full-length albums Jason has recorded with a revolving cast of friends and family behind him; all fifteen are good at different levels and in differing ways, but all share the common theme of a man who writes and sings with an old soul, writing plainly and honestly about aging and being tired--this is a band that released an album called Old with a track titled "My First Heart Attack" when Jason had barely turned 30. Now in the latter half of his 40s, I will fully admit that I found 2019's rather plodding Young in My Head to be the sign of a musician who was so deep into his own exhaustion that it was becoming less enjoyable to witness--a sentiment Jason seemed to almost agree with in the brutally downbeat "Remind Me" with direct lyrics ("Man, I need to go / I had my turn, stayed longer than most") that led many to think that might have been the swan song, and perhaps should be. Somehow, I should have known you can't keep a good musician down, and even more so you can't keep them from reinventing themselves and tapping into a brand new well of creativity, because Vanity is the best that Starflyer 59 has sounded in a very long time.

It is clearly a season of change for Jason Martin and Starflyer 59 in many ways; Vanity, a Velvet Blue Music release, is the first Starflyer LP to release on a label other than Tooth & Nail Records, where debut LP Silver was the third release in the label's history (technically, IAMACEO was self-released after being Kickstarter-funded in 2012). TW Walsh is credited as producer here, which is the first time since Aaron Sprinkle on 2003's Old that anyone other than Jason has received production credit for a Starflyer album. That change is clearly not inconsequential; Walsh fills up the space with giant synths and layers of diverse and expertly-mixed guitars, and puts an emphasis on the vocals almost never present with this band (as Jason recently described to NPR "That makes me uncomfortable, but that's something that a Starflyer record was never really about until this one"), and pushes the music in unexpected directions on nearly every song.

"Life in Bed," one of the best Starflyer songs of the last two decades, embraces the band's noisy roots with a build to crashing waves of feedback and a tortured, wailing solo the likes of which I have missed for years and didn't even think Jason had in him anymore. "Crossroads" is rooted in a deep synth bed with prominent, double-tracked vocals, and even features a sax solo. There are plenty of moments of guitar exploration, like the slide lead at the end of "Like to Lose," or the perfect EBow in "Sunrise," that take the type of musical chances that Jason has seemed to avoid on recent albums. Besides Walsh's brilliant synth/key parts on nearly every song, Jason is again accompanied by Steven Dail on bass and his son Charlie Martin on drums. Jason hilariously describes this familial arrangement as "He's great, man. I can't beat the convenience and the price." And while Charlie is a very straightforward drummer not really asked to do anything interesting, there is so much more always happening in the mix that the minimalism of the drums is less distracting than I found it at times on the last album.

When my JFH colleague Josh Balogh reviewed Young in My Head, he very accurately noted it to be a "succinct" reflection on longing for days gone by. He liked that album much more than I did, which is fine, but I listened to Starflyer at full volume as a 1990s teenager and I have admittedly struggled with the succinct and relentless weariness of Jason's recent music. And sure, here he sings, "Seems like I haven't changed at all" on "Crossroads" and "Everybody's out there / but I spend my whole life in bed" on "Life in Bed," but yet there's an upbeat energy to both the music and the lyrics of "Ya Right" and "New Guitar" that make you wonder if Jason is actually happier than ever after the changes of the last two years. Vanity is a brilliant return to form, and my favorite Starflyer album since 2004, hitting all the right Starflyer touchstones of vocal melancholy and resonating guitars, while introducing new musical elements that were just what is needed to make this legendary band sound renewed. I've now moved from resigned acceptance of a band past its prime to now eagerly awaiting what comes next, and I'm certain to spend the coming years returning to Vanity repeatedly the way I frequently return to Talking Voice and Fashion Focus. Long-time Starflyer 59 fans and curious newcomers alike should definitely give this album a listen, and as someone now in their 40s, it is gratifying to see that you're never too old to find a new creative peak.