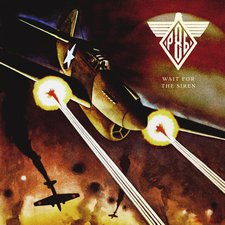 Project 86
Wait For The Siren

Andrew Schwab has been one of the most respected song writers in Christian rock music over the years. After three years, his band, Project 86, is finally releasing their eighth studio album, Wait for the Siren, and his writing is as strong as ever. Schwab and company do not disappoint musically either as this impressive collection of songs is one of their best. The record boasts one of the heaviest songs in the band's history in "SOTS," featuring Bruce Fitzhugh of Living Sacrifice, and one of the softest songs they've released in "Blood Moon." After a tumultuous on-again-off-again relationship with former label Tooth & Nail, the band is back in the independent underground for Wait for the Siren.

The album kicks off brilliantly with the anthem "Fall, Goliath, Fall" and is a song that should quickly become a fan favorite. Next up is the aforementioned Fitzhugh collaboration with "SOTS." Each of the opening two tracks interestingly circle around the David and Goliath story. The former has a slightly more obvious reference while the latter focuses more on the story itself. Schwab and Fitzhugh tag-team the chorus as they sing/scream the lyrics "Standing alone this ring (Quiet and calm); all that he holds six stones and a sling..." The duo continues, "Take aim let fly (Six stones and a sling)." The track is full of energy and should certainly satisfy both the hard rocker and metal head. From there, the hard rock energy stays pretty high with "Omerta's Sons" and the chiming bell played throughout the verses adds an eerie sense of darkness to the song.

"Off the Grid" switches things up a bit and gives a feel somewhat similar to "All of Me" from And the Rest Will Follow. "New Transmission" follows and is straightforward singing over distorted guitars; the music isn't overly chunky and the vocals aren't even really stressed at all. The song goes to show that Schwab is more versatile with his voice than sometimes given credit for. The consummate yeller and angry sounding singer is laid back as he sings this rock tune. Musically and vocally, "Defector" stays on track with "New Transmission," but lyrically it's one of the most beautiful songs Schwab has penned. The song speaks of a longing for Heaven as Schwab sings, "Counting down the days until I see you face to Face another day can I pace myself now?" The second verse is perhaps the best lyrical section of the song as he goes on, "There are pleasant inns along the way, but home will never be this place. I'd rather be forgotten than here eternally."

The softness of the previous tracks rises quickly to the level of "SOTS" with "The Crossfire Gambit." The song features a classic Project 86 title and is an all-out assault musically. This is another song that should have metal fans rejoicing, but shouldn't alienate the hard rock fans of the band. The energy spikes for one track then drops to one of the softest moments on the album with "Blood Moon." Don't get so caught up in the hard rock energy that you skip past this nearly worshipful track. In the chorus Schwab sings, "Who will catch you if the engines fail? Who will protect you if the trains derail? Who will revive you if your oxygen ceases? Who will provide you with a new heartbeat?" For the last chorus, the lyrics are changed to a personal level as "You" becomes the answer for "who will" and the subject is switched from "you" to "me" - "You will provide me with a new heartbeat." The odd feel of the song could cause it to be overlooked, but that would be a grave mistake. "Above the Desert Sea" (about the story of Abraham and Isaac) leans heavily on the bass guitar and features a classic P86 sounding bass line. If you had to pick a "weakest" track this could be pointed to as that, but to say it's a weak track would still be an overstatement.

Things go from slightly different to fairly strange with the start of "Ghosts of Easter Rising." The brief bass and drum intro quickly gives way to uilleann pipes (similar in sound to bag pipes) and a hammered dulcimer. The lyrics speak of the rapture and impending battle as described in Revelation as Schwab sings, "We wait for the siren, the crimson horizon, the right of our passage into promised land. The conflict approaching; adversaries waiting just beyond the threshold of our gates." The chorus goes further to say, "By Your hand we'll make our stand. They'll heed our command and flee this land." "Avalantia" features a layered musical approach as the song builds in each section and ends on a solid hard rock riff. The song also features another cry out to God in the chorus, "You were my ark and You carried me. You gave me shelter. You rescued me." "Take the Hill" begins with a very difficult to understand spoken word section before transitioning to the actual song. The lyrics speak of fighting for the truth in God's message when everyone around is denying it. After hearing God's communication, Schwab states, "They said, 'Shut your imagination. There is nothing beyond the visible. Devote yourself the legions and pledge assimilation.' - You left me here for dead, but I'll see you again. You thought that I'd relent, but I've been through you and back again." The track is quintessential P86. The album ends with the instrumental, and title track, "Wait for the Siren" and features the same uilleann pipes found on "Ghosts of Easter Rising."

From the musical to the lyrical, this is the most well-rounded Project 86 album to date. There could be a little too much diversity for some ears and there are some "stranger" aspects, such as the uilleann pipes, that may turn some listeners off, but the record is simply well-crafted from start to finish. Fans of the heavy P86 (Truthless Heroes, Songs to Burn Your Bridges By, or Picket Fence Cartel) have songs to enjoy and fans of some of the softer material they've released, perhaps from And the Rest Will Follow and Rival Factions, also have songs to fall in love with. When Andrew Schwab is given full creative control of his "project," it's fairly obvious that only good things can happen. Hard rock, and even metal fans, will not want to pass up Wait for the Siren. If you've been dismissing Project 86 in the past for one reason or another, now is the time to give them your full attention. They most definitely deserve it.

Project 86 has been a staple of the hard rock scene for sixteen years now. With each new album, fans have been in eager anticipation to see in what direction Schwab & Co. head in next. With member changes in recent years and an exodus from Tooth & Nail Records, some have been a little worried about the band's future. Thankfully, Wait for the Siren is the album we've been waiting for and it's 13 songs of hard rock and metal goodness.

P86 take things to the next level with some of their most brutal tracks yet, particularly "SOTS" and "The Crossfire Gambit." As one of the album's many highlights, "The Crossfire Gambit" is a beautifully crafted musical and lyrical kick in the teeth as Schwab addresses the common question in Christ followers' minds about God's forgiveness when we repent, "Descend / I might / Decide to indulge in perversion / I ask: / Will you / Still bathe me in crimson? / Obey / My covering in penitence / Obey / When faith it deserts me." With the growls of "OBEY," it serves as an anthem of rememberance to choose obedience over self-gratification. But this is just one example of the lyrical meat found on Siren and the musical exploration Schwab takes while still maintaining the unmistakable sound of Project 86. Wait for the Siren is one of the band's most well-rounded outings as an album of songs and the themes that run throughout it thread it all together quite nicely.

Whether this is truly the band's best album to date may need more time and listens to decide, but it's safe to say that Wait for the Siren isn't only one of P86's best records yet, but it's easily one of 2012's best, period. - John DiBiase, 8/19/12