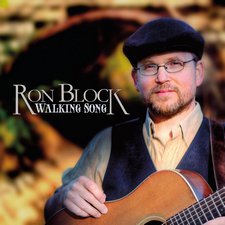 On Walking Song, Block's third solo album (apart from his work as a member of Alison Krauss and Union Station), even the most skeptical listener will find moments of ineffable musicianship and lyrics to make the heart dance. If you are indeed unfamiliar with the music of one of the finest banjo players alive today, you'd be no different from Block's new songwriting partner, Rebecca Reynolds. The pair became acquainted on an online forum discussing spirituality, literature, and music. Block would post, Reynolds would comment, and the two sensed enough of a kindred spirit for an admittedly naïve Reynolds to ask, "Would you ever want to write a song together?" The songwriting started in earnest and looked very promising when Reynolds finally searched her new friend's name online and discovered the existence of a Ron Block Banjo and a Ron Block guitar. Needless to say, this came as quite the surprise to Reynolds. But the fact that she wasn't star-struck gave the pair the freedom to foster a pairing reminiscent of Elton John and Bernie Taupin.

Two standout songs actually stray from the traditional improvisation and "pickin' and fiddlin'" most often associated with Bluegrass. "Colors" was inspired by a C.S. Lewis essay called "Transposition." Jeff Taylor's gentle accordion and Block's forlorn guitar-lullaby play counter to verses of the hollow emptiness of a pulsing cityscape. Here's what's great about this album: in five short lines we're not just told about a street musician, we're given a glimpse of her heart and the God who knows it. "She walks the corner, searching for a haven / To beat her hunger through six rusty strings / For copper saints, in God they trust / The prayers she prays are prayers she must / While heaven hovers close to hear her sing."

Another favorite is "Let There Be Beauty;" the lyric moves backward in time, with a Narnian mystery and a closing-line prophecy that foretells the opening. Herein again are enough lyrical gems to fill an ordinary album, describing the old ("Her wings have grown stiff with the already known / She's learned to see only what's been"), the young ("She was made seven and supple again / Feet bare and wet in the grass"), and one of the finest choruses I've heard in years: "So let there be beauty, for beauty is good / The made and the making and the bliss understood."

Not surprisingly, the supporting cast on Walking Song is a Bluegrass all-star team, featuring harmonica from Buddy Greene, harmony vocals from Kate Rusby, mandolin from Sierra Hull, and various contributions from every member of Alison Krauss and Union Station; just read the credits and be amazed. There are traditional Bluegrass instrumentals, characters named Farming John, and a fitting twang in Block's voice, but the album is likely to have broader appeal due to its abilities to stretch the genre and demonstrate its versatility.