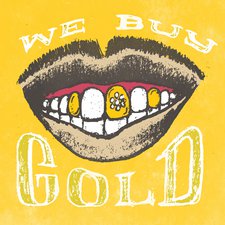 
After a successful fundraising effort earlier this year, in the form of an album called 1985 Party Time Excellent, the superstar tag team of Playdough & DJ Sean P are back at it already with their follow-up to last year's successful Gold Tips. Completely back in the independent music circuit once again, supported only by their loyal fans, the duo has released their labor of love, We Buy Gold.

One thing you can always count on from Playdough and Sean Patrick is a good time, but with substance. Though Gold Tips was full of party jams and was released on a predominantly non-Christian record label, Man Bites Dog Records, the overarching theme of the album was living the highest quality life possible (or, living life "gold tips"), which is backed up by the duo's outspoken Christian faith. We Buy Gold follows suit, with Proverbs 16:16 as the source material, if you will, for the album's theme: "How much better is it to get wisdom than gold! and to get understanding rather to be chosen than silver!" Each track, with the exception of "Jon Murda," has a specific Scripture to go along with it while serving as something you can rely on if you're just wanting to chill and listen to some high quality hip hop.

Some of the songs require some digging to find the correlation between it and its Bible verse. "King Tut" and "Humble Pie," for instance, are such songs, citing 2 Timothy 2:20-21 and Proverbs 29:23, respectively. Let's go with the latter of the two, which says "A man's pride shall bring him low: but honour shall uphold the humble in spirit." The guys don't really explicity rap about humility in this song, but it's implied in their lifestyle, as Sean opens up with, "I got my mom's keys and I'm 'bout to go, my tank is on E but I'm 'bout to go," and Playdough later says, "Bass is on ten, I got a car full of friends, and I ain't worried about the gas 'cause they all chipped in, so let's roll." But then there are songs like "Just Lose It," which uses Romans 12:2 and Matthew 16:25 to talk about not conforming to the world and instead losing your life for God's sake. "All The Way Up" talks about demonstrating your love and faith by your works, citing 1 John 3:18 and Matthew 5:16; Playdough says, "Your actions speaking louder and your words'll start to bore me, so I'm trying to shut my mouth so life could do the talking for me." The most straightforward track comes in a very serious song called "High Places." 2 Chronicles 17:6 mentions that Jehoshaphat tore down the high places where idols were worshipped, and Isaiah 44:9-20 goes into the hearts of those who craft golden images to worship. I love Playdough's line, though it's a sad reality that is in need of serious prayer by God's people: "We so lost, stacking like we playing it safe, we want to hold it 'cause it's easier than waiting in faith, we'd rather read a horoscope like any star's got a plan, we just blind leading blind, getting knowledge from man."

"High Places" may be the only track that wouldn't work in a club or at a party (and maybe the opening track, "Stunt Double," but only because it's so short). Sean P's beats have never sounded better, blending a modern flavor with old school sensibilities. A lot of the tracks also blend hip hop and rock together, a la Run DMC or earlier Beastie Boys. "Humble Pie" gets a killer guitar riff courtesy of Listener guitarist Christin Nelson, and indie wonder MrENC adds his own guitar skills to "Weight In Gold." A little extra instrumentation is provided on a couple of tracks, including from Playdough's longtime cohort Freddie Bruno, but otherwise, this is strictly a Playdough & DJ Sean P effort, with Sean handling 99% of the production, and Playdough taking 99% of the vocals (as mentioned earlier, Sean does drop at least a couple of rhymes, and there's some additional vocal work in "Humble Pie" from Bruno, fellow Deepspace 5 member Sivion, and others I'm not familiar with). My personal favorite track is the glorious "Step to the Ride," which puts the duo's chemistry and flair on full blast and, in this reviewer's opinion, truly gives the listener the best Playdough & Sean P experience. A gorgeous beat, especially during the hook, and an unparalleled rhyme scheme, particularly in the second verse, make for true excellence.

Playdough & DJ Sean P have delivered once again. We Buy Gold is a solid hip hop album from a duo that has more than paid its dues, both as a unit and individually, and I don't see them quitting anytime soon. More good things are sure to come, but as for now, head on over to your music store of choice (if you're looking for one of their limited edition vinyl copies, I believe Bandcamp is the only option) and pick up a copy of We Buy Gold and dig in to the songs and the Scriptures associated with them.