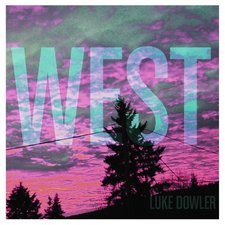 Perhaps taking a cue from Switchfoot front man, Jon Foreman, who released a set of seasonally-themed EPs (Fall, Winter, Spring and Summer) between late 2007 and mid-2008, or Justin McRoberts, whose recent C, M, Y and K projects gleaned their titles from the alphabetical symbols for the four inks used in the color printing process, Montana native Luke Dowler's latest offering, the West EP, is the first in a planned quartet of directionally-inspired efforts - the remaining three ostensibly being North, East and South.

Like Foreman's EPs, where the seasonal designations seemed, at times, to be all but randomly applied, it's hard to pin down exactly what geographic tie-in Dowler's latest offering has to its western namesake. That small nit notwithstanding, the high caliber of the opening compositions should render any such hair splitting exercise all but irrelevant. The engaging atmospheric leadoff cut, "Firewater Revelation," weds an irresistibly funk-rock groove (think INXS's "Need You Tonight") to a set of earthy, yet thought-provoking, lyrics ("Underneath the midnight sun/ Any virtue you might want/ Until the morning comes") similar to those of McRobert's most recent offerings. And the shuffling "College Towns" and "Good Enough," the second of which is propelled liltingly along by Dowler's lilting arpeggio-based fretwork and gritty, Joe-Cocker-meets-John-Mayer-styled vocals, are likewise hands-down triumphs.

The fourth track, "Hold up the Sky," however, slows the momentum considerably. Lacking the infectious syncopation and easy delivery of the first three songs, "Sky" plays out as a pleasant enough, but ultimately pale, cousin to those notably superior entries. Likewise jarring - although admittedly not due to any intrinsic lack of quality in the number itself - is the neo-new wave closer, "Halfway," whose fuzz-toned vocals and synth-pop rhythms render it absolutely mesmerizing, albeit somewhat incongruent when taken in the context of that which has preceded it.

It does bear noting that some of Dowler's lyrics may strike some listeners as either gratuitous or profane. This is a shame, really, as cuts like "Hold up the Sky" ("Some people want everything explained/Someone to tell 'em what to think/They're so scared to make a mistake/They never do a d*mn thing") and "Halfway" ("I know the outcome/ I got it outrun/I saw the spilled blood/ And, oh, my G*d!") would arguably lose little to none of their impact or meaning with the questionable wording excised.

In his defense, the abovementioned lyrical forays are decidedly infrequent in the grand scheme of the album as a whole. And the disputed phrasing on "Halfway" could well be an example of the singer talking directly to his Maker rather than resorting to that which is exclamatory. That said, intentions aside, for more than a few consumers, even a single instance of wording of that nature is one instance too many. Obviously, for those who aren't offended by this sort of usage, Dowler's new recording is an all but essential purchase. For everyone else, though, it largely becomes a matter of whether or not they're willing to burrow beneath its intermittent lyrical gray areas in order to uncover the piquant sentiment and sterling instrumental work underneath.