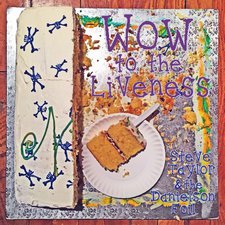 Steve Taylor & The Danielson Foil
Wow To The Liveness


Steve Taylor & the Perfect Foil added Danielson (Daniel Smith) to the mix earlier this year for an incredible EP of new music. Newcomers may have struggled to get on board with Smith's extremely unique, and high-pitched, voice, but those who did were rewarded in spades. Wow to the Deadness, a six-track EP, really featured everything that is right and good about Steve Taylor, Danielson Famile, and rock music in general. Steve Taylor's resurfacing and resurgence has been a welcomed attraction at this juncture of rock music. The group have now returned with Wow to the Liveness -- a full-length live album featuring the entire Wow to the Deadness track listing, several Steve Taylor & the Perfect Foil songs, a couple Danielson Famile numbers, and even one Steve Taylor classic ("Cash Cow"). Excellent production and sound make this a live album that is certainly worthy of your time and attention.

The album, which was recorded on February 13th at The Independent Oil Workers Hall in Gibbstown, NJ, kicks off with "A Wow Liturgy" in which Steve Taylor reads and the audience responds with pre-planned answers handed out before the show. Amazingly, the entire crowd plays along and there is little to no screaming from the crowd during the response times. What gives it an even funnier feel is Taylor's laid back and fun delivery compared to the crowds somewhat robotic and programmed sounding responses. It's a very entertaining start that likely played out as an extremely memorable experience for those in attendance. From here, the band rips right through Wow to the Deadness in the exact order as the actual EP, with "Muse" standing out a bit more -- especially with Daniel Smith squealing in the background on the chorus. The voices of Taylor and Smith blend as seamlessly live as they did on the recording and the two complement each other nicely.

After the official Steve Taylor & the Danielson Foil portion is over, the collaborators jump straight into a Danielson Famile favorite "Rubbernecker." However, this isn't quite the same version of "Rubbernecker" you may remember from back in the day. After less than a minute into the song, it changes directions completely as Steve Taylor takes over with his song "Rubberneck." It's a nice twist on one of Danielson's best and offers a bit of surprise moment in the show. From here, the show turns into a myriad of Steve Taylor & the Perfect Foil songs from Goliath. At this point, Daniel Smith steps aside a bit and can only really be heard from time to time in the background. After several Perfect Foil songs -- ending with "Goliath" -- the guys take a break to talk to the crowd and announce that they won't be leaving the stage before their encore because it was too cold outside. After a comical interlude about the temperature and their silver suits, they go into 1993's "Cash Cow." It's a fun addition to the album and you can tell there are plenty of old school Steve Taylor fans digging the song. Before wrapping up the show, Daniel Smith takes the lead again and is joined by the Famile for Danielson's song "Did I Step On Your Trumpet?" It's actually a really great rendition of the song and sounds better than the original. Finally, the gentlemen close the show out with "Comedian," from Goliath. The song works out to be the perfect closer to a really great concert.

If you aren't typically into live albums, you should give Wow to the Liveness at least one listen. Steve Taylor, Daniel Smith, and company offer excellent performances and the sound crew did a really nice job. The studio touched it up to sound even better with a great mix that at times doesn't even sound live. I genuinely hope that this isn't the end of this collaboration. While I don't see Steve Taylor & the Danielson Foil being anything full-time, it's just too good of a combination to not revisit again in the future. Wow to the Liveness is certainly no disappointment and has replaced Wow to the Deadness in my rotation. Enjoy this little piece of CCM history and grab your copy today.

From the opening seconds of "Liturgy" -- which finds Taylor putting forth the typical rock star exhortations to his audience ("How's everybody doin' tonight?" "Is everybody ready to rock?") and them responding with hilariously-scripted replies -- to the closing notes of "Comedian," Taylor and his cohorts fix their eyes straight ahead of them, put the pedal to the proverbial floorboard and barrel, full speed ahead, toward the finish line. And what a glorious ride it is. The sparse guitars/bass/drums set-up lends the gritty, borderline out-of-control hard rock of "Dust Patrol," the peppy pop of "Goliath" and the frenetic neo-new wave of Danielson's "Did I Step on Your Trumpet?" a sense of immediacy and grit that surpasses even that of their original studio counterparts.

All of this, of course, comes courtesy of Jimmy Abegg's blistering guitar work, the rock-solid rhythm section of John Mark Painter (bass) and Peter Furler (drums), Daniel Smith's endearing quirkiness and, perhaps most crucially, front man Steve Taylor's off-the-cuff humor and undeniable rapport with his audience. Pulling liberally from Taylor's last two Foil-related efforts (2016's Wow to the Deadness and 2014's Goliath before it), and sprinkling in a pair of older cuts, one a piece, from Danielson and Taylor, this is pure, unadulterated rock and roll the way it was meant to be played: raw, fast and loose. Those who are already familiar with musical genius of Taylor and his band mates will need little convincing to pony up the money for the new record. For everyone else, particularly those willing to toss aside their preconceived notions of what inspirationally-based pop/rock ought to sound like in the year 2016, Wow to the Liveness may, at long last, be the record that brings the long-time naysayers into the fold. - 8/8/16, Bert Gangl of Jesusfreakhideout.com