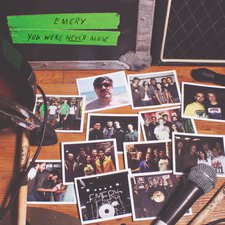 Emery
You Were Never Alone


A lot can happen in four years. And a lot has happened in the last four years for the members of the band Emery. The rockers released their first album without Devin Shelton in their ranks; they left their home of almost a decade, Tooth & Nail Records; and they started a podcast called BadChristian, which has grown to include a ministry of sorts, several e-books, and an independent record label. Last summer, with the return of Shelton, the band launched a crowdfunding campaign for their first independent album since the mysterious The Columbus EP. You Were Never Alone is the band's sixth full-length studio album, and is the result of about a year's worth of hard work.

The thing about Emery is that, whenever they're on the cusp of releasing a brand new album, fans of the band know what to expect. Every album has an inescapable charm to it, with certain qualities that come standard with the rockers; indie rock with a touch of emo, a mix of tender and satirical lyrics, and some screaming when appropriate. The other thing about Emery is that, whenever they're about to release a brand new album, fans of the band really don't know what to expect. Though they're consistent with their sound, they're also not fond of doing things the same way each time. And with that mindset, You Were Never Alone is ripe with fresh material and experimentation. I'd be remiss if I didn't mention one of the most experimental (and strongest) songs of the bunch, "Thrash," for example. While it features some of the heaviest music we've ever gotten from Emery (yes, some of it is harder than anything from We Do What We Want), it also features some of the softest music they've ever produced (outside of straight-up acoustic songs and demos). The song blasts its way through the beginning with intense screaming and some double bass and blast beats, mellows out into indie rock through the middle, and culminates in an Alabama Shakes-esque style. It took some adjustment, but it quickly became a favorite of mine.

Speaking of favorites and doing things differently, "Go Wrong Young Man" is another track that's not quite like anything they've done before. It has an infectious energy and a solid groove, and the choruses (if you will) are sung at a very fast pace that matches the almost blast beat of the drums (though it's not heavy at all, just fast). Interestingly, there's also this guitar line that repeats throughout almost the entirety of the song; you'd think it would get old, but there's so much going on in the song, and so much progression, that you hardly even notice it. Everything comes to a screeching halt except the drums and Toby's voice, for a portion of the song that's very chantable and would be so amazing to participate in at a live show. If I heard this song on the radio, I'd buy the album immediately; the same can be said for "Pink Slip." It has a lot of classic Emery touches to it, including layered vocals, as Toby and Devin sing different lyrics and melodies over each other.

I could say a lot about the music, but Emery fans know that their lyrics always give us something to talk about. The band has been very vocal lately about false Christianity, confronting it not only with BadChristian, but also in their music. Bringing up "Thrash" again provides for a good example; near the end of the song, there is some intense screaming to match the convicting lyrics, which go as follows: "Your rigid throats proclaim the righteous written Word, but you cut out the veins and now you sleep with her, it's dripping from your mouth, it's pouring from your skin, the lust of power takes you and the stench has settled in." Wow. Emery knows it's time for Christians to actually step out and not just proclaim the Word, but act on it as well. But there's no superiority complex here; they know that they aren't exempt from the failure, as evidenced in lyrics like "I'm not an honest man, I was born for the grave" in "Hard Times." Some of my favorite lyrics come in "The Beginning," where Devin takes the leads and sings "Death was only a word, but to a jealous heart that's made its plan, it was the soil that gave it birth." Maybe I'm reading too much into it (and maybe I'm not), but it's a good analogy. Death holds no power over followers of Jesus, but jealousy in the heart allows it to have power.

It seems like such a long time ago when We Do What We Want came out, but the wait is finally over. Fans who have grown antsy due to Emery pushing the album back a few times will be more than satisfied with the finished product. It's hard to compete with nostalgia, and I love The Weak's End and The Question, but You Were Never Alone is absolutely in the running for Emery's best work. Strangely enough, the band is embarking on a tenth anniversary tour for The Question as this album releases, but if they play any of this new material, attendees will be in for a real treat. Make sure you pick up a copy of this album, pronto.

Emery's last album came out in 2011, and that's simply too long for fans of these post-hardcore geniuses to be left in anticipation. With running Bad Christian Music, constant podcasts, and various other outlets, the boys in Emery seem to be overly busy these days. After they took a few years to write material and the return of Devin Shelton, I've been stoked to see what You Were Never Alone would offer.

The album starts off with "Rock, Pebble, Stone," which is rather calm from what I was expecting, and left me hoping for more from the very first song. However, "Trash" comes along next and quickly rights the ship with uber unique music laid over solid heaviness combined with a calming chorus, creating the near perfect emo-filled tune that I was longing for. Emery always takes the time to hit on real life, everyday circumstances that play out nicely with clever lyrics such as "You ever catch yourself just thinking of a way to get out, it's like a reflex motion. The words slip in and leave a taste that you let linger for days inside your heart" that keep listeners connected. That emotionally charged vibe is found in songs like "The Less You Say" and "Salvatore Wryhta." Both are moving and need to be played over and over again. "Hard Times," "The Less You Say" and "Pink Slip" are also standout staple Emery tracks guaranteed to be enjoyed by fans.

The rest of You Were Never Alone is filled with good hard rock songs and the only track that falls a bit short is "Go Wrong Young Man," which has the sound of a garage band recording. While this release might not be as amazing as some previous Emery albums, there still aren't many missteps, and it is overall a great album. - Review date: 5/18/15, Kevin Hoskins

Emery is no stranger to controversy and that fact had many wondering what You Were Never Alone may have to offer. The short answer: Emery has released what is possibly their best album to date. There are no controversial moments on the record and shades of This Weak's End and The Question are evident throughout. "Thrash" offers up one of the group's most unique songs ever (starting as a heavy thrash and death metal inspired song and ending with a more R&B vibe); more experimental songs like that and "Go Wrong Young Man" coupled with absolutely fantastic numbers like "Pink Slip," "Hard Times," "Taken For a Bath," and "Salvatore Wryhta" make YWNA a homerun. Some fans my hold to In Shallow Seas We Sail, but it's this reviewer's opinion that the Emery boys have completely outdone themselves and released an album that's very near perfection. - 5/22/15, Michael Weaver of Jesusfreakhideout.com

Is your favorite Emery record The Question? In Shallow Seas We Sail? Whatever your choice, make room for You Were Never Alone. This long anticipated project has your classic Emery songs, like "Hard Times" and "Pink Slip," which display the post-hardcore band at the top of their game, but it also covers new ground with the light melodic "Rock, Pebble, Stone" and the intensly chaotic "Thrash," which ironically ends with a soft jazzy ending. Toby Morell's crooning and screaming never sounded more majestic--especially contrasted with the vocals of returning guitarist Devin Shelton. The songwriting is poetically designed for you to pick up on thought-provoking one-liners on initial listens, and reveal deeper stories and themes (perseverance through opposition, dealing with life changing events, and of course broken relationships) after several more spins. The only criticism is the repetitive screeching guitar riff on "Go Wrong Young Man," which seems largely unaware of the rest of the music. But even that small glitch doesn't hinder YWNA from being Emery's most impressive work to date. - 5/14/15, Christopher Smith of Jesusfreakhideout.com