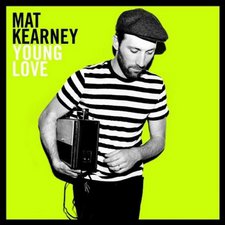 With a few successful musical endeavors under his belt, both in the Christian and mainstream markets alike, Mat Kearney returns with his fourth studio album, Young Love. A handful of video sneak previews of the album had been released throughout the recording process on Mat's website. These teasers combined with the tremendous success of the previous two full-length releases have elevated expectations for this record to great heights. Rest assured, Mat does not let us down.

The first single, "Hey Mama," leads off and establishes a quirky, upbeat feel that the record maintains throughout the majority of the ten tracks. The lighthearted nature of the song is evident with the persistent clapping and fun lyrics, "Couldn't be more opposite, I'm hard to please and you're hard to get, You're Mississippi and I'm Oregon, You're sun tanned and I'm porcelain skinned." The second track is a return to form for Mat, featuring the unique spoken-word sessions that were notably absent from City of Black and White. This is not a lone occurrence, as more rapped stanzas can be found on "Chasing The Light" and slightly on "She Got the Honey." It is definitely not as commonplace as we saw on Bullet or Nothing Left to Lose, but it is sprinkled in this time around.

"Count on Me" throws what sounds like a children's choir into the mix. This song somehow manages to use playful references to convey a genuine message without being cheesy or awkward. "Sooner or Later" and "Down" are also both solid tracks, in the same vein as most of Kearney's pop/rock material. "Young Dumb and In Love," like the opening track, is another poppy love song that fits with the title of the record, "Under the weeping willows and the sea of fireflies, With your gypsy necklace on and my big brown bowtie, You kiss my lips like I was catching a flight, I said, If I'm honest I fell for you that first night."

Some of Mat's best work comes when he slows things down a bit. "Learning to Love Again" is one of the best tracks found on this collection, a simple and intimate letter to a hurting friend, "'Cause that was the real you running through the fields of gold wide open, Standing in places no picture containsHey brother, we're all learning to love again." The album closer, "Rochester," feels extremely personal and heartbreaking, as well. There's a story told here about Mat's father desperately wanting to escape from his unfortunate circumstances. Take note, though, the lyrics reach into some real-life topics and word-choices that might make some listeners uncomfortable (including using the word "h*ll" questionably). The song itself is calm, powerful, and unlike anything Kearney has put out before.

Young Love is another solid release from one of the industry's best talents. The album does not have many direct references to Christian themes, but it does manage to avoid any clichés with solid songwriting from beginning to end. The sound remains very similar to the previous releases, but with a bit more polish and confidence. None of the tracks seem to be flippantly thrown in to clutter the album; they are all significant inclusions and worth a listen.

One of the more unique things about Mat Kearney was his infusion of hip-hop into his acoustic music. While that fusion wasn't as prevalent on his second-and-a-half album, City Of Black & White, Mat Kearney's latest, Young Love, features a reestablishment of that sound. The results of adding the hip-hop ingredient to Kearney's acoustic pop songs lead to less moody sounding tracks and more up-tempo, snappy beats. "Hey Mama" and "Young Dumb And In Love" are both catchy as well as a little quirky, while the finer craftsmanship is on display on "Ships In The Night." Although there are more upbeat and intricate song structures on display throughout, with the exception of the guitar-driven "Rochester," the album isn't as emotionally gripping as either City Of, or Nothing Left To Lose. Young Love is the least spiritually obvious album to date from Kearney and some of that can be attributed to the time he spends exploring the idea of his title of his album. More than a couple of tracks celebrate triumph over adversity in the context of struggling relationships, but, to get to that place, Kearney includes some edgy themes and language (some of which includes three misuses of the word "hell"). "Down" features some ambiguous spiritual messages, while the acoustic finale implies a father's redemption is sought from the Lord. Although Young Love works just fine in its own niche, I can't help but wonder how the final result would have sounded if the album would have featured a little more the very best of what Kearney offered on previous efforts. Throw in the discretion that should accompany all of those who pick up the album, and you are left with a good project that falls short of being great. - Nathaniel Schexnayder, 8/1/11