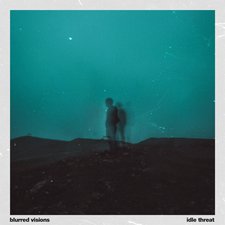 
The debut album, blurred visions, from recent Tooth & Nail signee idle threat helps to fill a void that's been looming over Christian rock in recent years. It's becoming increasingly difficult to find passionate post-hardcore or indie rock that's accessible yet creative, heavy yet memorable, spiritual yet poetic, consistent yet varied, thoughtful yet unassuming. Dare I say, blurred visions is all of these things: a beacon of hope for Christian rock that's as unabashedly "Christian" as it is "rock." It was one of 2021's best albums, and it continues to get better with each successive listen, revealing its layers, intentionality, and battle-born spiritual wisdom.

idle threat first appeared on my radar with their Tooth & Nail premiere, the 2020 EP Nothing is Broken for Good. As a follow-up to this EP, blurred visions is everything a fan could want: stronger performances and more confident songwriting, presented with far superior recording quality. Composed of drummer Justin Jones, guitarist/screamer Ernie Fabian III, and bassist/singer Zeke McKinney, the Nashville-based three-piece evidently put their all into making a special album. Each song has its own identity, from the upbeat punk of "damage control" to the subdued acoustics of "simon," yet it's all glued together by a cohesive production style that softens its harsher hardcore elements beneath the fuzz of garage and indie rock. Meanwhile, each song lyric sounds like the fruit of a spiritual lesson that the band members experienced, memorializing hard-earned truth within lovely poetry.

Even the flow and dynamics of the album set it apart from its peers, with most of the upbeat, crowd-pleasing rockers delegated to the second half. A top-heavy album, this is not. Instead, the collection opens with a group of mid-tempo reflections with 3/4 time grooves. It's not uncommon to hear Fabian's screams over what would otherwise be the softest, quietest section of a song. Arrangements grow and build at their own rhythms, rarely constrained to the verse-chorus song structure or to the abrupt loud-to-soft shifts that have long hampered the post-hardcore genre. Such characteristics call to mind the genre-defying dynamics and surprise breakdowns of Beloved, which makes it no surprise, then, that the slow-fade ending of "safety in the shade" seems to pay homage to Beloved's "Rise & Fall."

As previously mentioned, this album truly comes alive as you let the lyrics sink in. "arrogant love" is the song that hits me the hardest, with its tale of pompously defending the truth in the name of love, yet blinded to how those actions wholly lack love and grace: "Listening and constructing the thoughts for a reply / Allegations and accusations for me to deny / A silent killer, a shape of cancer lives inside / Through raised voices, the wrong choices undermine my life." This song is followed by the poignant ballad "simon," written from the perspective of Simon Peter as Jesus is about to be crucified. Similar to "Hindsight" by Wolves at the Gate, this song explores Peter's realization that he wasn't the amazing disciple that he thought he was, as displayed in the song's gorgeous chorus: "When You were troubled in Your spirit / I was sleeping in the garden / When they were hurling accusations / I denied You to their faces." A notable feature of this song is how the band maintains a mellow tone throughout, never building into beefy guitars or screams, as many in this genre would be tempted to do. The album doesn't stay soft for long, though: as "simon" closes out Side A, the second half kicks off with my favorite track from the album (and one of my favorite songs from 2021), "the gold grows dim," which features many of the album's most bravura musical moments, tied to crowd-pleasing jams and provocative lyrics.

While my early listens through this album didn't really click with me, there isn't much nowadays that keeps me from calling it a "masterpiece" other than my confidence that the band has better albums waiting within them. If I were to dig for a "flaw" on the album, I would note that "no turning back" isn't a particularly satisfying closing track, but I think that has more to do with the song being released as the album's first single, rather than there being any problem with the song itself. All in all, blurred visions is a deeply moving and rewarding album that ranks as one of my favorite debuts of the past few years. In my opinion, idle threat might be Tooth & Nail's most exciting signing since Artifex Pereo, and I hope that this album marks the beginning of many years of output, among the likes of Valleyheart, Mantric, Loyals, Paradise Now, and Tigerwine. With a roster like that, I could imagine a Tooth & Nail resurgence, with idle threat destined to become a household name for fans of the genre.