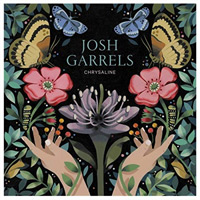 
Josh Garrels, the folk-rock troubadour from the Pacific Northwest (who now resides back in his native Midwestern state of Indiana) has truly done it his own way since his very first album. He predated the independent music movement of the last decade in recording and releasing his own unique brand of spiritual rock and roll for almost twenty years now, and his latest, the butterfly themed Chrysaline (a word meaning of, or resembling a chrysalis), finds the veteran musician experiencing a season of radical change and emerging with a clear view of how the Lord uses suffering and confusion to refine the believer.

Harkening back to the simpler folk melodies and structures of his earliest works, Garrels largely avoids the bombastic statements of the massive Love & War & The Sea In Between (the album that blow-torched hip hop beats to gargantuan themes and choruses). In turning back the clock a bit on his sound, Garrels runs the risk of alienating his newer fans. But given the chance, Chrysaline reveals itself to be an epic album in its own right. With a bit of both Rock and Roll Hall of Famers Peter Gabriel and Paul Simon apparent in the genetic make up of his sound, Garrels has both a sonic and poetic gift with a song.

With a lush sonic backdrop, the opening A Gift finds Garrels being as upfront about his faith as he ever has been in song. In the Psalm-like refrain he intones: Every mouth is like an open grave / No one searches for you face / There are none righteous ones among / All of us have gone astray / But You came and gave Yourself away / You are the only one there is / Only by Your blood can we be saved / Oh Lord, this is a gift, from You. In the following, sweeping Anchor For My Soul, Garrels references the famous metaphor in the book of Hebrews when he sings I have seen enough to know / That Your loves the only anchor for my soul / So please dont You ever let me go / If You do I will be lost forever Lord / Swept away by the waves of the storm.

With a savvy, orchestral pop-rock backdrop, the rest of the album serves up a steady meal of weighty songs that might not overwhelm the senses on the first pass, but deserve a few listens to unpack the gems hidden underneath the surface. The rocking, epic Butterfly (a song that references the crisis of Garrels losing his voice for a season during the recording of the album, and then experiencing both a miraculous healing and a spiritual epiphany about the suffering process) is the exception here with its immediately likeable chorus and bouncy nature. The following track, Praise Him - Songs Of Water, features an array of exotic instrumentation against an epic backbeat that feels like a journey of hard-won praise in the midst of trials, while the slower, meditative What A Friend echoes the old hymn What A Friend We Have In Jesus.

Clocking in at a massive fifteen songs, and ending with the rousing instrumental Evangeline (a piece that deserves to be the end credits song of a suitably epic film), Chrysaline is a sonic journey that plays out like that film you saw that you knew you liked, but couldnt put your finger on just why. Then in repeated viewings, you grew to love the subtle twists and turns of the slow-burn narrative. Chrysaline has that narrative quality and is a rewarding and epic album that will grow on you if given the chance.