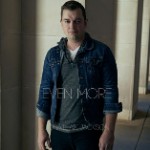 
In 2016, a band called Echoboy released its first EP, followed shortly by its second in 2017. The band seemed like it was on its way to bigger things, but disbanded shortly after the second EP, Not Alone. Lead vocalist Jonathan Jackson, however, is moving on with a solo career, and, keeping pace with Echoboy, already has a brand new EP ready for delivery. The name of the EP is Even More, and it contains four brand new songs and one re-released and re-recorded song from Not Alone.

The EP begins with the title track, which features a mix of pop styles, from a funky Walk the Moon type of dance pop to an 80s throwback feel that sounds like something from Alexis Slifer's last EP. It's a fun way to start the EP and it has potential to grab the listener in for the ride. In an odd shift, the following track, "Better," slows down quite considerably. The song also changes stylistically, with a Twenty One Pilots-esque, electronic reggae, and features a mix of Jackson's singing and some rapping courtesy of Matt Dally (ex-Superchick). Dally's inclusion is a bit on the surprising side, but I actually think it fits in well with its surroundings, as he chides himself for his own selfish behavior. Right in the middle of the tracklist, we're greeted with "Not Alone," which will sound familiar if you've listened to the last Echoboy EP. The song is essentially the same as the original, with a slight alteration of some lyrics, with the end result sounding more victorious.

My personal favorite track of the bunch is actually a pop ballad called "Even in the Heartache." Though the song is about as radio-ready as they come, with its swelling chorus and easy-to-remember lyrics (the bridge repeats "I will sing 'blessed be Your name'" quite a number of times), it's a joy to listen to, and a great tool to remember to praise God in the harder times. My favorite section says "Everything that I've tried has fallen apart, so I give up and give it all to You, because You'll make a way through the worst of this life, and I can be still knowing You'll fight my fights, I'll walk by faith in the darkest of nights, and I will sing 'blessed be Your name'." As the song ends, it smoothly transitions to the final song, "Hear Your Voice." It begins as a softer piano ballad, but introduces some nice dancey synth in the hook without raising the tempo too dramatically, if at all. You can tell that Jackson truly desires to hear the voice of the Lord, a desire that all Christians should have (John 10:27).

I was personally looking forward to hearing more from Echoboy, as I thought their material was above average when it comes to other bands that might consider themselves contemporaries. Though Jonathan Jackson is continuing on by himself, he is still utilizing a lot of the same writing, recording, and producing team, giving us a product that is truly his own, albeit not too entirely dissimilar from what I was expecting to hear. Even More is a clean, solid batch of tasty pop delights that can easily be recommended to fans of artists like The Digital Age or Southlen. Take a chance on this.

It's always refreshing to see an artist fully embrace who they are. Indie artist Jonathan Jackson is the picture of that with his incredibly solid EP, Even More. Jackson utilizes each of the 5 tracks to leave a lasting impact on listeners, easily capturing fans of mainstream pop and CCM radio. The production is high quality and full of equally talented instrumentation. Lyrically and melodically, he is able to make what may have already been said completely fresh for modern listeners. His deft and meticulous placement of wording gives the lyrics appropriately assigned weight. For instance, on the song "Better," when Jackson sings, "How is it better to take than to give? How is it better to hate than to live?" Listeners can feel the tension of "hate" in contrast to the release of "live." It's wonderfully thought-out. While every song clearly portrays a Christian worldview, songs like, "Even in the Heartache" and "Hear Your Voice" feel like they carry more of CCM sound that could easily be heard in a "before the Sunday service" playlist. Bottomline, Even More is a great way to start your 2018 Spring season. The music has the pop elements for good times and the lyrics to provoke Gospel thinking. This is the music that makes people excited about finding a new artist. - Review date: 3/30/18, written by Ryan Barbee of Jesusfreakhideout.com 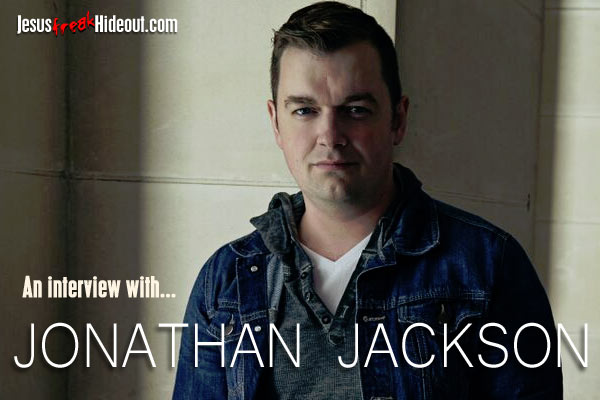 Jonathan Jackson: Echoboy was a really fun project that my brother Joel and I and a buddy of mine named John originally started. Basically, as a band and personally, we started to go in different directions and priorities started to change. During our time as a band my brother was focused on film making and we just decided that since we started the project together, it would be best to end it together on good terms. It was a good time and I'm grateful to have been a part of Echoboy and I'm also really proud of the music that we made.

Jonathan: "Not Alone" was written toward the end of Echoboy with our friend Riley Friesen (producer for Family Force 5, Brandon Heath, Jordan Feliz), and looking back, I guess it was the beginning of my solo project. It was a song that I really resonated with musically and especially lyrically. I never really thought about re-recording it; I loved what we did, but I did change the end of the second verse from "We are not yet free" to "You have set us free;" the original was dealing with still living in a fallen world but we didn't communicate that idea as clearly as it needed to be. We do live in a fallen world and still struggle with sin, but ultimately, as believers, we have been set free.

Jonathan: I got to know Matt through Riley. We wrote "Better" and the song "Even More," which features drummer Lester Estelle (Kelly Clarkson, Pillar) and guitarist Derek Mount(Family Force 5) together. Matt is one of my favorite people and a great songwriter. If you're having a bad day and get to spend five minutes with Matt, he'll brighten your day. He just makes people laugh and is a really fun dude.

Jonathan: It was awesome getting to write at Word and I'm hoping we'll have some more in the future! I think a record deal for almost any artist is viewed as the "pinnacle" of achievement. That really would be awesome, but I kind of had a breakthrough when I started this project about eight months ago, and it's that, as an artist, it's my job to make music. Period. Whether I have the backing of a label or not. So that's what I'm doing. Hopefully they take notice, but even if they don't, I'm still going to be making music. It's a compulsion, a calling, and it's who I am.

Jonathan: I think that we as a culture are struggling with worry, fear, and doubt all the time. Anxiety is a very real thing that many people wrestle with. There seems to be a tension in Scripture where we see people struggling with doubt, worry, and fear, and yet proclaim their confidence in a God who is ultimately bigger than all of it. Just look at David in the Psalms when he was hiding from Saul, who wanted to kill him. Fear was very real for David, yet he seemed to find peace and safety in God. We also see in Job where, in the midst of doubt and fear, losing absolutely everything, including his health, he somehow managed to say "Blessed be the name of the Lord" in the midst of total tragedy. I really identify with David and Job. So many times I don't feel "safe" or "secure," but I know that the Lord has me in His care and I can trust Him to provide for me even in the heartache.

Jonathan: I grew up listening to all types of music: hip hop, pop, rock, and R&B, and I studied classical piano performance in college. I think I've always been drawn in to good music/good songs regardless of the genre. I've always loved pop music and I think a lot of my material with previous bands was very pop-influenced - it just had a rock edge to it.

Jonathan: Well, I'm usually writing just about everyday or working on production, so I would say that I don't really have any other hobbies other than spending time with my family right now. We live in a community with amazing food, so I'm always down to check out any new place that has great Mexican food!

Jonathan: You know, I really feel like I'm supposed to be ministering to people from the stage, sharing my songs and my heart and, frankly, I don't know what that looks like moving forward. It might mean having the support of a record label and touring, but it might not. I'm hoping to be playing a number of festivals this summer, which would be a great opportunity to serve people. I've got vision for more records (I'm writing a lot) and touring, but right now, I'm just waiting to see what the Lord wants me to move on and I'm okay with that. I think if we can be confident and secure with who God has called us to be and content with the gifts that He's given us, we'll live better, less anxious lives where we're not holding onto our dreams so tightly that they become idols.

Jonathan: I owe so much of my creative drive, energy and, frankly, the inspiration for this album, to the amazing folks over at Full Circle Music. They have been an inspiration, a source of encouragement, and have introduced me to good friends in the music industry who have become my favorite collaborators that I probably never would have met outside of FCM. I'm also grateful to Ben Calhoun, Riley Friesen, J. Hall, and Michael Sanders for their friendship and great work on this record. I've also got a new single in the works as well, so stay tuned!