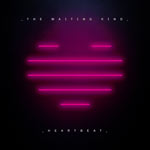 The Waiting Kind is a progressive pop/rock band that released a full-length album in 2009 and an EP in 2011 (both available for streaming on Spotify) before taking a hiatus. After 5 years, the band has re-formed and is looking to release some new music. Fans of the indie rock sound present on their debut release, In the Land of Hope, may be a bit surprised by the strong pop sound emanating from their new single, "Heartbeat." If you were hoping The Waiting Kind would pick right up from where they left off, you may need some time to adjust. However, fans of modern pop stylings will likely be right at home with "Heartbeat." Singer Derek Henbest's voice soars on the chorus as he sings, "Be my heartbeat beating again with praises. Spirit breathing again with new life. Oh-oh-oh-oh, I am Yours. Oh-oh-oh-oh, You are mine. Heatbeat again." Musically, some may just hear another generic pop song, but repeat listens actually reveal a pretty in-depth production with a lot of instrumentation highlighted by the cool sounding keyboard riff in the breaks and the guitar runs at the end of the second verse. "Heartbeat" may be a surprise for 2009 and 2010's listeners, but the song will undoubtedly grow on you if you aren't hooked on first listen. Fans of the band's older material, and fans of good pop music alike, should give The Waiting Kind and "Heatbeat" a listen.