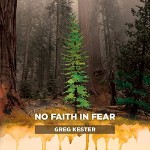 Greg Kester
No Faith In Fear


The rise of alternative music in the 90s changed the music scene, mostly for the better. Mainstream radio was finding a new sound in bands like Nirvana, the Red Hot Chili Peppers, and the Foo Fighters, while the Christian side of the industry was being blessed by the likes of Audio Adrenaline, Plankeye, and dc Talk. Even today, many artists are still influenced by the sounds of the decade. Californian singer/songwriter Greg Kester is one of them, as he captures different aspects of 90s alternative on his newest album, No Faith In Fear.

The album begins with an upbeat sound that feels really good, especially the rocker "Luminary." This one particularly reminds me of "Jonah" from Grammatrain's 1997 album Flying, with distorted, grungy guitar riffs and loud vocals that find some happy balance between singing and yelling. Though the rest of No Faith In Fear is solid, it's also a bit more tame. "Live and Breathe" and "The Road" have a rock and roll feel that sounds like they borrowed a bit from late 80s and early 90s hair metal, but it's mostly a subtle influence rhythmically and melodically; nothing else on the album finds itself matching the energy of "Luminary." I'd personally love to hear more rock like this in future releases.

But, as mentioned, the rest of the album is still quality, and rather eclectic by 90s alternative standards. The title track is a good example: a mid-tempo track that changes back and forth from 3/4 to 4/4 time and features a string section and a very nice sounding trumpet. Strings are also present on the acoustic lament "Rescuer," while "The Road" uses some well-placed synths. In an interesting turn of events, "Peace Be With Your Spirit" makes itself the proverbial odd man out by bringing a sort of southern, front porch bluegrass sound to the table. Mixing the bass drum, quiet shakers, acoustic guitar, and a banjo with a bit of reverb makes for a bit of a surprise in the tracklist.

No Faith In Fear carries a strong message with it, most notably in the title track itself. Fear is everywhere in society today, from scary movies and Facebook posts to real life events and tragedies. With the declaration that "We won't put our faith in fear," Kester aims to encourage listeners to look to Jesus instead of their fears, and charges believers to show the world that we don't have to be afraid of anything if we have the Lord. Kester also makes his faith in God's provisions clear in songs like "Rescuer," which borrows (and slightly rewords) from Psalm 23: "Please lead me beside peaceful streams, refresh me, refresh my soul, and may goodness and love surround us all, from now to the days we grow old." I also like the heart behind "Peace Be With Your Spirit," which tells the story of a man who tried to do things his own way, but couldn't succeed until he gave up and began relying on God's promises.

With encouraging and worshipful lyrics and an ear for creating both catchy and well-written alternative music, Greg Kester has caught my attention. His musicianship is strong, and he has employed some other talented musicians and vocalists to provide some terrific melodies and add new, appreciated layers to each song. Rock fans who enjoy cleaner and more polished sounds may have a hard time getting into No Faith In Fear, but the longtime alternative rock listeners, and those more open to a grittier sound, will find themselves right at home. 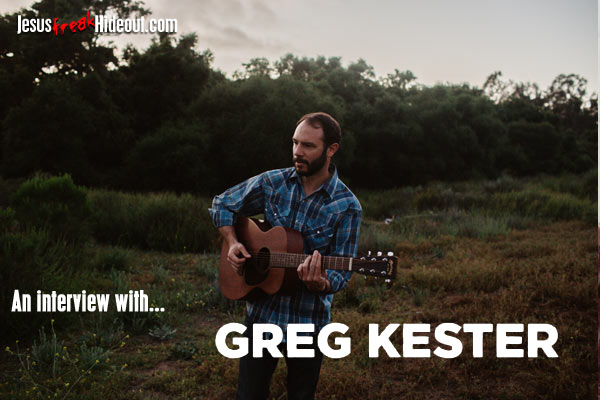 Greg Kester: Did either of your parents ever have "that one song"? It was the only one they knew on piano or guitar, but they just played it so well and you drooled over how cool they were? My dad would shred this gentle little arpeggio on acoustic guitar and listened to lots of awesome jazz and blues in the house. Those are some of my earliest memories. Then there was the time I got in trouble because a few buddies and I were trying to play "Enter Sandman" or "Stairway to Heaven" in church before a Catholic mass at one of our first public performances. We got shut down and I knew at that moment that rock and roll was probably in my future. I really did (and do) love liturgical music, but once I heard Nirvana and The Police, music grabbed a hold of me. I then survived on Tooth & Nail Records compilation CDs for years...literally did not eat or drink, just listened to everything (full disclosure: I did eat - do not attempt multi-year rock fasting). My friends older brother also was in the Philly Christian punk scene and threw a concert in their basement. It rocked. My friend and I were maybe ten years younger than everyone else and I felt cool for being there. I remember the guitarist for this band - I think it was One-21 - was kind enough to teach me a Mighty Mighty Bosstones riff. If anyone at the show thought I was cool to begin with, I bet I just blew their socks off with my impression of "The Impression That I Get."

Greg: I did. The first band in high school was Mystereo - we were huge. We played one gig ever: a renegade performance at our high school variety night that included a member from the rival high school...we were rebels. Then in college it was Hamilton. This was the first time people crowd-surfed at a show from a band I was in...very memorable. Then it was The Fever Dream. The Fever Dream was such a huge deal that we drove from Penn State to New York City (approximately four hours) after classes, played at The Bitter End from 2-3 AM on a Tuesday night to a crowd of six people and then drove back for 8 AM classes. I made it the whole way without falling asleep at the wheel until a block before my house where I lightly tapped the bumper of the woman driving in front of me. No damage. No problems. Good times.

Greg: I do occasionally. I often play lead electric guitar, but also lead acoustic and sing for some chapel services and small groups. Live performances have been limited this last year as we focused on finishing the album, but, when available, I try to play a couple of times a month.

Greg: This has been a long work in progress. I feel at rest having put the work into this work of art. Some of the earliest ideas for songs are 6+ years old. But the brunt of the work was accomplished over the last three years. Most of the songs were written acoustically and went through a lot of revisions as they evolved. Many of the lyrics were inspired by thinking through key lines from sermons Ive heard (mostly by Pastor Mark Foreman), or deeper reflection on Scripture like Psalm 23 ("Rescuer"), Jobs story ("Luminary"), and when Peter denied Jesus ("These Eyes"). Some songs, like "Rescuer," flowed without much change between early demo and final recording, while others like These Eyes went through 10+ revisions with the band through tempo, transitions, time signatures, and production. We really took care and spent time because we wanted to capture the spirit of live-rhythm section takes of all the songs, so we aimed to have them as tight as possible going into recording.

Greg: The song "No Faith In Fear" was completed before the album had a title. I had great input from my wife and other band members, who helped me see it as a title that represented the work as a whole. I was moved by the idea that everyone puts their faith in something (self, God, nature, fear, etc), and that the object of that faith is critical. I dont necessarily believe that there is no fear in faith. I think when Jesus was in the garden, He experienced fear. I think we can all experience fear. I think it becomes an issue when we believe God is smaller than the thing that is giving us fear, or when we put our continued faith in that fear instead of in God. I also think the world has been in a very unsettled place and the message that our God has conquered fear could be a light by offering a hope that is grounded in something eternal. It is kind of an anthem that I hope resonates with the heart of believers.

Greg: Tough question! Artists that I consistently come back to are Zero 7, Mutemath, Foo Fighters, Louis Armstrong, and Josh Garrels. Guilty pleasure: Jackson 5/Michael Jackson. I dont see how anyone could not break into a spontaneous dance party when P.Y.T. comes on.

Greg: I recently received an email titled Your album that said, We need to talk...words like guilt, shame, temptation, and God all hit me like a ton of bricks because of whats been going on with me. It would be great to catch up over lunch or a beer sometime! This was from someone who I knew for about six years, saw from time to time, but was not a close connection of mine. The Spirit behind the music caused him to reach out to me after watching some of the videos and listening to some of the songs. He did not know I was a Christian and I did not know where he was at spiritually. We met up and were able to have some great discussions, encourage one another, and be vulnerable with some faults we both have. The fact that these songs helped accomplish that is really my goal. I hope peoples hearts are stirred and it opens up dialog in their community that ultimately points towards the Gospel and the hope we have.

Greg: Thanks for this opportunity and for what you are doing here at JFH! This is a great source to come learn and discover more artists that are expressing the heart of God through their creativity. Music is so great and I am passionate about it as a way to express that creative character of God. I hope all of this encourages others to create music if they feel compelled. Its awesome.