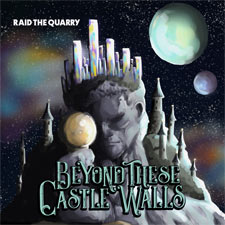 Raid the Quarry
Beyond These Castle Walls

North Carolina natives Raid the Quarry got their start in 2014, but became the complete unit they are now just two years later, locking in their core line-up and getting to work on their debut EP, Priority One. The band doesn't seem interested in rushing their work, as they've just put out their third release in 2022, a full-length record entitled Beyond These Castle Walls. Raid the Quarry is quite firmly an alternative rock band, but they definitely don't shy away from mixing it up with different flavors of alternative. "Elegy" opens in somewhat of a sea shanty fashion, bringing to mind the opening track of Glowing Moses' 2021 album Event Horizon, but then the next two tracks amp it up with driving rock & roll, akin to a Rusty Shipp/House of Heroes hybrid, which proves to be their bread and butter. They take a few opportunities throughout the record to dive into more of a pop rock sound, like "Same Page" and "Eight Wing," but these tracks do more to expose the album's weaknesses than when they're hitting harder. For instance, Daniel Stidham's vocals sound much better in a more raw, gritty rock setting than a shiny pop rock song. "Same Page" also suffers from some cheesy lyrics (examples: "When you're looking for direction / and my pain can't find expression / we've got that brain connection" and the one-liner "Like Jim and Pam, you're the camera that I look into" - sweet, but a bit cringy). However, a good portion of the album hits this band's sweet spot. I love the energetic "User," the pop punk-ish "Cosmic Darkness," and the terrific guitar work in "Give Me That Evil." And while, as mentioned, some of the lyrics leave some to be desired, there are plenty of other moments that stand out, such as the chorus of "Parallel" ("We watch the shadows on the wall / we gaze now darkly through the glass / like sailors tempest-tossed and clinging to the mast / we wait like children for the dawning sun to pierce the veil / until the morning light, the night prevails"). Several of the songs feel a lot more allegorical, as well - even a bit fairytale-like at times. It makes me want a fully-fleshed-out concept album from these guys. But even as the album is, there's a lot to like here, with the few aforementioned areas for improvement. And from the sounds of Beyond These Castle Walls, I think Raid the Quarry should have no problems sorting out the issues and creating a truly great rock album. If you're looking for some new rock to dive into, be sure to give this a listen!
- Review date: 12/29/22, written by Scott Fryberger of Jesusfreakhideout.com