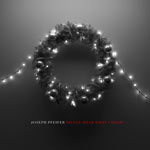 Joseph Pfeifer
Do You Hear What I Hear?

West coast singer-songwriter Joseph Pfeifer successfully released his independent debut album, Good Company, back in 2010 (as well as the Lost Boys EP in 2014). Pfeifer is back now to release his first Christmas album, Do You Hear What I Hear? The album contains eight holiday classics and one original song. The record starts with a nearly acapella version of "Carol of the Bells" -- there isn't any real instrumentation, just some ambience behind Pfeifer and a woman's voice. It's a short and sweet rendition, but a very pretty listen. "Angels We Have Heard On High" is the traditional version, but done in a style you might hear from a worship leader such as Chris Tomlin. The guitar lead at the beginning and between the chorus and verses is a very nice touch to add some additional flavor to the track. "Do You Hear What I Hear" continues the CCM Christmas vibe further with a piano and delay effect on the electric guitar. "Be Thou My Vision" is the least heard of the traditional songs and very well may be the best addition to the album with its softly picked guitar. It's easily an album favorite. "Hark! The Herald Angels Sing," "Joy to the World," and "O Come All Ye Faithful" bring a strong country flair to the table. The first two are faster paced numbers with "Joy to the World" having a strong "picking and grinning" type feel. "O Come All Ye Faithful" is a slower track that brings a slide guitar into the mix. All three of these are interesting takes, but are a bit unexpected after the first handful of songs. "Joy to the World" takes the cake as the most fun to listen to of the trio. "We Three Kings" blends the CCM and country aspects. This song is one of my personal Christmas favorites and I always love to hear any interpretation available. Pfeifer's "The Innkeeper" closes the album and focuses on the man that sent Mary and Joseph out to the manger. The song is a softer piano driven number in which Pfeifer sings, "If the innkeeper only knew, he would've made some room." It's a nice little song to close out a festive album. If you're a fan of Christmas music, you can't really go wrong with Do you Hear What I Hear?, as there are several fun versions of Christmas favorites to be heard. And, honestly, can one really get enough new Christmas music each year? Merry Christmas, and enjoy Joseph Pfeifer's Christmas celebration! - Review date: 12/7/16, written by Michael Weaver of Jesusfreakhideout.com