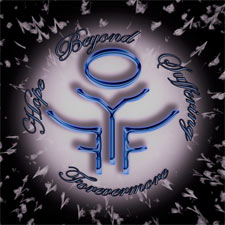 Husband-wife musical duos usually appear in the folk genre. Hope Beyond Suffering (Drew and Vannah Brammell), however, turns that stereotype on its head and instead plays symphonic metal. Recently, they released their latest effort, Forevermore (EP), featuring one instrumental track (the opener "Rest") and three lyrical tracks that take the listener on a journey. The first two (the title track and "Awake") have a more spiritual focus, singing about the endless love of God and the struggle to awake and accept that love. The closer, "Leaving Behind," is a long rumination on attempted suicide that is ultimately broken up by God's light.

While the lyrics don't break any new ground, they are competent and occasionally have a good turn of phrase. The music works well, for the most part, though there are times (especially on the closer) where the timing with the drums feels off. The Brammells trade off vocal duties, with Vannah getting the lion's share. This works out as her voice is the stronger of the two--though Drew's vocals work in their own way and they act as a good counterpoint. The main complaint in the vocal department would be the screaming, which didn't work well for this listener. Overall, though, Forevermore feels like a diamond in the rough. It certainly has some bright spots, but plenty of rough edges as well. Smooth those out and Hope Beyond Suffering becomes an indie metal band worth keeping an eye on.