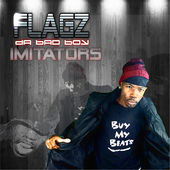 Rap and hip hop have steadily gained popularity over the last few decades and have become two of the most popular and influential cultures and styles of music in the modern times. This goes for both the secular world as well as the Christian world. No matter how you feel about that, it's spawned an entire market of Christian emcees who use the same sounds but change the lyrics to glorify Jesus. Flagz da Bad Boy has been doing this very thing for the last several years, and has released his latest album this year, an album called Imitators. The musical style is very much akin to what's popular in mainstream hip hop today, although the production is slightly indicative of an independent release. The clear standout track from Imitators comes in "About U." It's a love song to Jesus, where Flagz raps about his desire to spend his eternity with God, while thanking Him for some of the good things He has done for His people through the years. The hook is wonderful and catchy, with a female vocalist coming in to sing "I'm so crazy about You, and I can't let You go, You're beautiful." The same could also be said for the hook of "One Day." Unfortunately, there is little else on this album that stands out. Some of the samples and soundbytes used are very questionable (not that they're vulgar, they just aren't very pleasant to listen to), such as the uncomfortably-weird laugh that repeats throughout the hook of "They Lyin' To You," or what sounds like Alpha 5 from Mighty Morphin' Power Rangers saying "Crank this joint then" in "To My Invisible Fans." Flagz speaks a lot about being a Christian versus being a sinner with more pride than grace, and even has a song that talks about how he saves souls. Of course, I know he isn't saying that he literally saves the souls, as Flagz knows that Jesus' forte. But, sadly, he seems to bring an unnecessary confrontational manner that might make a non-Christian listener feel very offput. Imitators is the work of a rap artist with some potential, but with a little bit of confusion as well. Consistency of lyrics is definitely a key focus for him, as well as perhaps a softer approach to evangelism. He may even benefit from a crowd-funding campaign or something of the sort to help him get some professional production and mastering and get the best possible sound out of his music. I truly hope to hear something great in the future from Flagz da Bad Boy. - Review date: 10/25/14, written by Scott Fryberger of Jesusfreakhideout.com