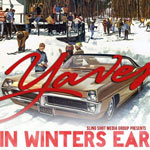 Even though artist Yaves has been doing his rapping thing for 20 years (according to "Rumble Young Man"), this is the first I have heard of the Sling Shot Media rapper. In Winters Ear is the newest release from the Columbus, Ohio native. The album carries a west coast style of hip hop that will likely appeal to fans of gangster rap. Songs like "Revolver" and "Down Bad" have positive messages, with the former speaking on the need for correct life priorities and the latter focusing on striving through people hating. Most of the production throughout isn't bad, but there aren't really any stellar beats to make one nod their head to, although there are some stellar one liners lyrically. Such gems would include, "I'm about to flood the game, you should probably make an ark" and "angel's wings on my shoes my brotha," which showcase Yaves potential for superb lyricism.

The second half of the listen mostly matches the first set of tracks with decent hip hop tunes, but nothing overly stellar. The final track, "Blood Covered Snow," does stand out with a unique chilling vibe that details the story of murder, with the chorus hitting home, "laid wide awake in the blood covered snow, seen the sun, rise to the moon, and I'm headed home," leaving a spine tingling ending to this short listen. Yaves clearly has the desire to reach troubled young people and has the potential to make solid music, but there's just not enough here to make me keep listening to it over and over. If you dig hip hop, you may wanna try it out, but if you pass on this one, you're not missing anything exceptional.