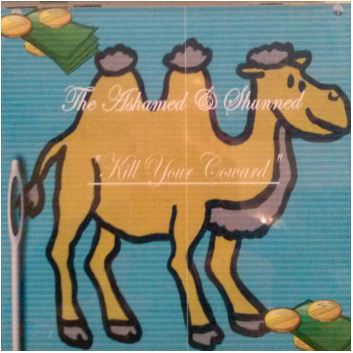 The Ashamed & Shunned
Kill Your Coward


The Ashamed & Shunned is a bit of an enigma. Information about the project is pretty scarce, and his bio reads, "The band bio is not important. I am me, but I am you." Suffice it to say, we don't know a lot about him until you actually listen to the music. His latest revelation comes in the full-length album, Kill Your Coward. The Ashamed & Shunned's music is rooted in hip hop, but branches off into shades of alternative and electronic music, as well. The music sounds purposefully lower production quality, as if most of it was created with very basic music recording and editing software. On the plus side, the music and beats are eclectic and experimental, with a bevy of electric instruments, all the while being entirely written, produced, mixed, and arranged by the sole member of The Ashamed & Shunned, who goes by C. Longfellow. One of my favorite tracks is "Megiddo," which features a catchy melody that matches the melody of an electric saxophone. The track also features a '90s influenced beat that gets stuck in my head. "If Tomorrow Comes" gets a little grittier, with some thick bass and guitar-like synth, while "Hey Lady" brings a funkier sound, and "30 Pieces of Silver" is almost a rapcore song, with more intense vocals from Longfellow. And speaking of the vocals, Longfellow does mix singing and rapping together in just about every song. Though he doesn't particularly excel at either one of them, there is something about his voice that fits the vibe of the songs. His voice is rough and scratchy, reminiscent of vocalists like .rod laver's Rudy Nielson and independent rapper James Fate. Occasionally, his flow will sound a bit like Sev Statik, but the similarities don't extend any further than that. Kill Your Coward is an interesting listen, one that won't appeal to all hip hop fans. The Ashamed & Shunned does seem to be a jewel in the rough of independent hip hop artists, but to really enjoy it, you'd have to have a taste for lo-fi, experimental music. That being said, give it a listen, and you might be surprised how much you enjoy it.
- Review date: 6/10/17, written by Scott Fryberger of Jesusfreakhideout.com