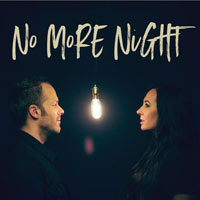 
Loudbrook is a worship act comprised of the husband and wife duo Bryan and Melissa Lautenbach. The two recently ran a successful crowdfunding campaign which led to the production of their forthcoming new album, No MoRE NiGHT. The fifteen-track album spans an hour in length and is full of original songs that fit in quite well with the current landscape of worship bands. Musically, Loudbrook is quite captivating, with lots of instrumental variety while maintaining a cohesive sound. The band blends contemporary, pop rock, and little bits of indie pop to create a sound in the same vein as bands like The Ember Days (just slightly less ethereal and more pop-oriented). This is where the band really shines, along with much of the lyrics, a great deal of which are purely Scriptural (May God Arise, May His Enemies Be Scattered, I Am Who I Am,etc). In other areas, its a bit of a different story. Melissa is a talented singer, but a lot of the songs feature either breathy or reserved vocals instead of full-on singing. The album would have definitely benefited from some louder, more impactful vocals. No MoRE NiGHT and Long-Suffering are excellent examples; they have big choruses with ample room for loud, triumphant singing, but they feel held back with the quieter vocals. On a few tracks, Jars of Clay frontman Dan Haseltine provides his unmistakable voice, but more often that not acts as a background vocalist. Aside from the aforementioned issues, the only other negatives would be some awkward melodies (parts of Joy and Miracles Happen, for instance) and the confusing lyrics of Holy Spirit Give My Heart To Jesus. Since we as Christians can directly approach the throne of Jesus, Im not sure what this song is going for. In the end, there are a lot of great moments on the album, and its worth your time when it releases. Make sure to keep an eye on Loudbrook, as I have a feeling theyll only keep getting better.
- Review date: 5/22/19, written by Scott Fryberger of Jesusfreakhideout.com