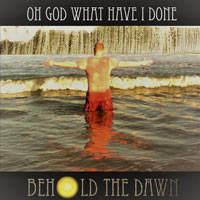 Behold the Dawn
Oh God What Have I Done


"Oh God, what have I done?" That's the cry of the sinner realizing that his life and actions have been unclean and filled with sin. It's also what sparked the idea (and title) for the new album from hard rock and metal band, Behold the Dawn. Oh God, What Have I Done pulls no punches with its straightforward, biting judgment of sin, coming at it from different angles. From the eyes of a sinner repenting, to a proclamation of God's victory over sin and death, Behold the Dawn makes every effort to declare Jesus' triumph over the world and its wicked ways. Interestingly, the song "Universal Destiny" is even sung from the perspective of God to the man Jesus, calling Him to be the Savior of all mankind. Of course, the line "Rise up my Son, be baptized and receive salvation" seems a little questionable, given the context, but otherwise, it's an intriguing perspective for a song. As far as the overall sound of the album, we find some real strengths and some noticeable weaknesses, such as the lower production quality, resulting in some muffled sounds occasionally. One thing I like about it, though, is that it's very clear that Behold the Dawn knows a thing or two about making solid hard rock; the title track hits hard with a heavy, thick guitar riff akin to bands like Red and Saliva, while "Forgotten Prayer" takes things up a notch, drawing from the Living Sacrifice well to pummel the listener's ear drums with fast riffs, double bass, and blast beats. The vocals are just as varied as the music, with a well-balanced mix of screaming and clean vocals, all of which are used appropriately to match the feel of the song. That being said, both the screaming and the clean singing stand out as the area with the most room for improvement. The cleans are sung in a classic metal style (a la Petra, Stryper, Narnia), which is a style of singing where it's a lot more noticeable if you aren't hitting and/or maintaining the right notes at the right time. Meanwhile, the screams sound really raspy and grating, like the vocal chords are actively - painfully - being shred to pieces. Behold the Dawn is an obviously talented act that could very well be on its way to bigger and better things, but in its current state, some work on the vocals and higher-end production would work wonders.
- Review date: 10/14/18, written by Scott Fryberger of Jesusfreakhideout.com