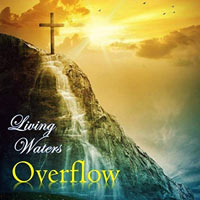 
It was 43 years ago that the worship collective known as Living Waters was formed. Though the band isn't as active as most bands, it's still an impressive length of time to stay together. Despite the decades of existence, 2011 was the first time Living Waters released an album, with a follow-up in 2016, and now a third release in 2019. Overflow is chock-full of classic Christian contemporary rock, much like what you'd hear from acts like Big Tent Revival, with a focus on storytelling like you might hear from The Choir (though, admittedly, the writing isn't quite as strong). In addition to telling stories, Living Waters' songs vary in message, from the encouraging "Sing To Jesus" to "When He Came Into My Life," which details the transformative power of Jesus's salvation. The band's Catholic beliefs are also present in some songs; the most obvious case is the song "Hail Mary," which is a musical rendition of the Catholic prayer known by the same name. (It's rather unfortunate, considering Paul's words in 1 Timothy 2:5, "For there is one God, and one mediator between God and men, the man Christ Jesus"). On top of the theological discrepancies, the album's production shows room for improvement, with some songs being louder than others, and several occasions where the sound could have been cleaned up a lot more. Additionally, many of these songs were written in the 70s and 80s, and the lyrics and music don't feel like they have aged well. At the end of it all, Overflow is more than likely to appeal most to a rather niche audience than a broad one. But if you're interested in classic Christian contemporary and the Jesus Music movement, you may end up finding something to like here.
- Review date: 6/19/19, written by Scott Fryberger of Jesusfreakhideout.com