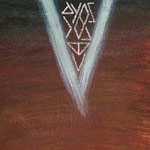 Doom Tiger is one most prolific indie artists around. David Taylor, the brainchild behind Doom Tiger, has been improving his craft musically, but more importantly, from a production standpoint, since his first release, Doom Tiger EP, back in 2013. Doom Tiger returns in 2016 with the newest album, Phoscoria. The album offers up some more Doom Tiger flavored metal, but the music goes beyond the genre norm of standard doom or death metal and even incorporates some nu metal characteristics. While the vocals are pretty standard death metal shrieks throughout, the music itself isn't as vicious. In fact, in a lot of places, it's much more open and airy (taking some cues from Ospheria) as it chugs along. Things like the nearly whispered spoken word in "Continental," the extremely eerie and haunting guitar solos in "Oceanic," or the interesting nu metal/death metal blend of "Upper" and "Lower," keep you guessing what may be around the corner. The most all-out death metal moment on the record occurs with "Gutenberg," a track that was nearly left off of the record according to Taylor. "Gutenberg" flows seamlessly into "Interlude" with a nicely executed transition. While it's the least "metal" song present, "Interlude" steals the show for my money. It's a softer song that features a lot of different guitar parts that sound equally trippy and cool. Perhaps the most interesting song present, however, is the closer, "Inner." The run time of this one track (33:10) exceeds the entire run time of the first eight (29:32)! The track meanders along for an over half-hour adventure that goes through many different segments; it's like five or six songs in one. My biggest complaint with the album is that the overall volume of the recording is a little low; I have to crank my speakers quite a bit more to get to a good listening volume. Otherwise, the mixing is pretty solid for an indie release. Phoscoria is arguably Doom Tiger's most experimental and creative work to date. While not for every metal listener, Doom Tiger's last three albums, Phoscoria included, have really stepped up to the plate and delivered interesting, and even enjoyable, listens. - Review date: 9/20/16, written by Michael Weaver of Jesusfreakhideout.com