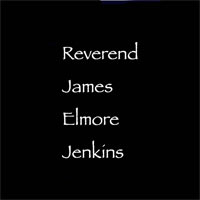 
Reverend James Elmore Jenkins has both a name and a voice that belies a road-weary troubadour, replete with the stories to match. After spending many years in various bands, including The Otis Nixon Band in 2003 and The Moon which released three albums before disbanding, Jenkins struck out on his own in 2020 with a trio of albums, including a full-length and two EPs. Here in 2021, he is following up the last of those releases titled Side A, with a five-song EP of new songs called Side B. Once again, Jenkins returns to the well of folk stylings that contain hints of Bluegrass, Gospel, and Americana for a diverse mix of sounds. Opening tune "Broken Radio" isn't an obvious choice due to its more mid-tempo pace, but it does ooze a certain charm with a B3 organ laying a strong foundation for the whimsical tune. "City of God" is next, but suffers from some uneven backing vocals and repetitiveness in the lyrics accompanying the country-shuffle sonic palate. The harmonica solo in third track "Dark Rooms" is a nice touch, with the Reverend sounding very Dylan-esque, helping the song stand out among the others on the tracklist. It's this straightforward guitar and harmonica combo that gives it the distinction of this reviewer's favorite overall song. "Rise Up!" features gruff vocals, driving percussion, and tasty guitar licks working in tandem for a fine tune full of verve. All in all, while not everything on Side B, like Side A before it, works perfectly, there is undeniable talent and several earnestly delivered songs worthy of a listen, with "Dark Rooms" and "Rise Up!" chief among them.
- Review date: 3/22/21, written by Josh Balogh of Jesusfreakhideout.com

Reverend James Elmore Jenkins · Side B