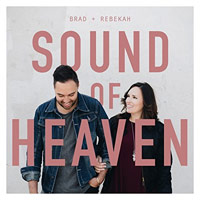 
It's amazing how radically different our perception of music is influenced by its history. After all, what would Sufjan Steven's Carrie and Lowell or Kings Kaleidoscope's Zion be without the departing loss of a soul that the artist connected to and influenced its creation? Likewise, the worship duo Brad + Rebekah join this treasured trove of artists to give us a new take on just what an album can be while also highlighting the theme of identity within believers everywhere. I'm not even kidding here; these guys recorded this album with the intention of asking churches from all over the world a simple question; "What is lacking in the body of Christ?" Such faith should be rewarded with a listen to see what a labor of love that spans across the world results in at most and whether or not what was asked was accomplished at least.

Sound of Heaven's inception can be traced over four years ago, but if we go even further back, we'll see Brad + Rebekah's heart for serving the world can be found in their consistent charity to Uganda. After falling in love with the country eight years ago, the duo has persistently donated proceeds of their music to the children there. Not content with keeping their love hidden under a bowl, they went so far as to team up with Watoto, a child care ministry from Uganda who partnered with them for the track "Never Alone." While the world is blessed with worship artists whose hearts line up perfectly in relation with the faith they profess, the degree that Brad + Rebekah display is remarkable. It stands directly in opposition of what cold, calloused religion does, and make no mistake, they give all the glory to God, reserving none for themselves.

Though it is a worship album, Sound of Heaven doesn't keep its head in the sand to the changing culture of worship music either. The album's closer, "Sing," is especially deserving of attention. Filled with springing synths and jamming percussion that complement the infectious melodies within, it's evident that Brad + Rebekah love what they do. However, despite its pure heart of gold, I have some bones to pick with this album. In no way can I herald this as a landmark in terms of musical achievement. From an aesthetic point of view, it will not stand the test of time when the bar has been set so high from the previous champions of worship artists who have entered the fray. It plays it safe and forfeits the right to become a part of any actual technical discussion.

But make no mistake, Brad + Rebekah will be among the greatest in heaven due to their sheer love. Their music is wholly worthy of praise, and not because of what it contains but who it's been contained for. The beauty of Sound of Heaven ultimately lies in its complete dedication to giving the body of Christ what they genuinely wanted. Even in the face of a flawless production and roaring anthems, this album would lose half of its value alone if it wasn't so drenched in the love we are all called to embrace and display for the world to see. While it may occupy a space far from the cutting edge, there is no doubt Brad and Rebekah have fulfilled our Lord's commandments to the fullest degree with this album. I encourage those who seek to find music with heart to give Sound of Heaven a listen, relishing the very fact that God uses all that belong to him to bring his kingdom another day closer to the hearts of men and women everywhere; even to the ends of the earth and back.