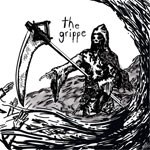 Doom Tiger is a very prolific indie metal artist. Recording everything from doom, to death, to drone metal, brainchild David Taylor is looking to give every sort and metal its fair shake. His album, The Grippe, features some pretty cool artwork of a grim reaper -- which actually goes along with the concept. Taylor says The Grippe is an extreme doom metal album that is based on the Spanish flu outbreak of 1918 -- known as "la grippe."

Musically, the record is at its best in the slow open areas with clean vocals. The sound is so eery and fitting for the story. The guitars on this album are also some of the best sounding on any Doom Tiger recording thus far. Both parts of "Second Wave" are the best examples of these characteristics. Following these are the four parts of "Song of the Forgotten." Doom Tiger uses more instruments and creativity in these four tracks than in previous efforts. While the overall production is still a little muddy, The Grippe proves to be Doom Tiger's finest work to date. The very nature of doom metal limits his audience, but Taylor is proving to be more than a metal hobbyist. Solid sounding music, with good instrumentation, and a really interesting story (one dark and fitting of such a metal endeavor) make the album a worthwhile listen for metalheads. For my money, "Second Wave, Pt. 2" and "Song of the Forgotten, Pt. 3" are the overall best songs here. Doom Tiger has shown great strides since his initial EP. If you've read about Doom Tiger on JFH in the past, but decided to skip his music, The Grippe is very likely the best place to start.