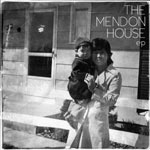 Oftentimes, all it takes is a friend's guidance for a musician to get a footing and put out some music. Such was the case for singer/songwriter David Hertweck. After teaming up with an independent producer friend, Hertweck took to a small studio and recorded The Mendon House EP. The opening song, "Chosen Mystery," has some fun, upbeat piano that doesn't rely on merely chords, but the rest of the EP offers song structures that are rather quiet and simple, with a lot of basic keyboard, guitars, synth, and drums. Now, depending on a lot of different factors, this could either be good or bad. In Hertweck's case, it's actually a good thing. Hertweck doesn't seem to be aiming for lots of bells and whistles, just a simple means of providing some uplifting and worshipful songs for Jesus. A lot of the lyrics here are directly inspired by Scripture, like the allusion to Psalm 23 in the chorus of "Chosen Mystery," or Psalm 3 in "David's Song" ("You are a shield around me, You surround me, this is my story, You are my glory, and the lifter of my head"). The lyrics, as far as writing goes, go hand-in-hand with the musical simplicity, and they're both solid in this aspect. There are plenty of good things to say about The Mendon House, but there are also a couple of noticeable criticisms. The first would be the production value. This EP was recorded in a homemade studio in a garage, and it's not difficult to tell. It's very clear that they had some good hands in the producing and mastering stages, because it's not completely raw and unpolished. But at times, the songs do sound a little muffled. I think that some work could also be done vocally. Hertweck is a good singer, but if he sang a little louder, he would sound better. I'd love to hear him stretch himself in that area. In addition, "David's Song" and "Heart That's Yours," which feature a singer named Brooke Malara as the main/only vocalist, may have been better had Hertweck sung leads with Malara on background vocals or harmonies. Malara isn't a terrible singer by any means, but she's not a strong enough singer to carry either of these songs all the way without the listener missing Hertweck's voice. Altogether, David Hertweck's first outing in the music world is a step in the right direction. With some production and vocal work, he could definitely gain a decent following. Fans of The Glorious Unseen or MercyMe's lighter work will enjoy The Mendon House EP. - Review date: 9/23/12, written by Scott Fryberger of Jesusfreakhideout.com