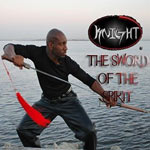 Knight 7
The Sword of the Spirit

Experimental music is a very real thing today. While many people don't want to reinvent the wheel with their music, a select few completely color outside the lines. Their sound will fuse unrelated genres, rhythms, melodies - everything is up for grabs. The only downside with this approach to music is that it only reaches a very limited market. Indie artist and newcomer Knight 7 is most definitely made for a select group of musical adventurers. His unique blending of genres on his latest release, The Sword of the Spirit makes for an interesting listening experience. Starting his album is the melancholic but hopeful "Man of Faith." Its sound has a raw reggae/90's gospel/hip-hop feel while maintaining some modern elements. This is the sound of most of the album. Songs like "A Knight's Prayer" and "Born Again" continue with a introspective lament towards sin while looking for hope in Christ. The standout track is a cover of the BeBe Winans song, "These What Abouts" as the music takes a more central position, though it is a very simple gospel arrangement. Overall, the quality of the recording lacks with the vocals overpowering the instruments. While Knight 7 might be going down the road less travelled, there are some listeners who are looking for something very different and they might find it with this album. - Review date: 7/7/14, written by Ryan Barbee of Jesusfreakhideout.com

A marvelous truth about praising God is that He does not require perfection to do so. Believers with voices of all kinds singing to their Lord are counted equally as beautiful as those with strong voices. Such is the case for Dwayne Parker, aka Knight 7. The Guyanese/Canadian singer has recently released his first album, The Sword of the Spirit, which is a very underproduced, Caribbean-tinged gospel/r&b album that features struggling vocals. Parker's heart for worship is fully on display, but sadly, so is what seems to be a poor production quality. While some Christian music fans may prefer to have gentle music over the louder, more boisterous sort (the former is what you get with this album), Parker may have benefitted more from louder music, as his mostly off-key vocals do tend to drown out everything else. If Knight 7 releases any more albums in the future, this might be something to take into consideration. If you want to make music, but you aren't so great at one aspect of songwriting, amping up the other aspects tends to help slightly - the integrity of this move may be fairly questionable, but it helps. At the end of the line, The Sword of the Spirit has many flaws, and I certainly can't make a big recommendation for it, but perhaps Dwayne Parker will take the album's weaknesses into consideration and come out the other side with a stronger product next time around. - Review date: 7/9/14, Scott Fryberger of Jesusfreakhideout.com