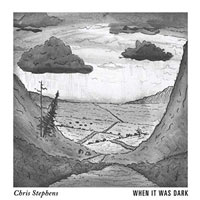 Chris Stephens
When It Was Dark


After playing with the award-winning Canadian rock band Three Season Ant for eight years, frontman Chris Stephens headed slightly south to New York, where he's played along with the band Landmark and is now writing music as a solo act. His first solo release (save for a Christmas EP last year) is a five-track EP, called When It Was Dark, that focuses on Stephens softer side. Whereas Three Season Ant was somewhere between MercyMe and Switchfoot on the alternative/pop rock spectrum, When It Was Dark is a softer mix of acoustic and contemporary pop. And it's the music itself that really shines on this EP, with tracks like Way and Before standing out the most. The former has a slow but catchy electric guitar line in the chorus mixed with some vaguely poppy drums and bass, and the latter contains an atypical rhythm and a nice string section for added depth. The vocals and the lyrics tend to take a bit of a backseat when compared to the music. Stephens vocals feel a little more out of place in this setting than as a lead singer of an alternative band, and it can be a little distracting. Though, on a positive note, his faith is represented in real and relatable ways. To reference Way again, Stephens speaks an all-too-familiar language, saying Where are You? / Im in the valley of the shadow of death. Hes also open about struggles that keep him from reaching the potential God has for him in Old Friend. Theres a lot to like about When It Was Dark, as well as some room for improvement. But in the end, its a solid effort and I anticipate future releases to get better and better.
- Review date: 9/25/19, written by Scott Fryberger of Jesusfreakhideout.com