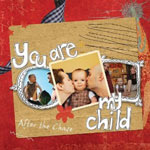 After The Chase
You Are My Child

After connecting through the worship band they were both a part of (and subsequently marrying), Nathan and Jenna Strong are now the head of their own band, After the Chase. In 2004, the duo, and their accompanying band of musicians, released their first official recording as After the Chase, a self-titled full-length album. Another album followed in 2008, and their third this year. Entitled You Are My Child, their latest offering contains ten brand new tracks in varying styles of music. They bring the album to a start with a folky track called "Change Me," a style that shows up again later in "Your Arms." Of all the styles they experiment with, it's the folk material that ends up being the strongest, which deserves some respect, because many bands make attempts at sounding good with this genre, and few obtain it. "Coolio High Harmony" takes things into more of an acoustic pop area. The song's beginning sounds good, but when the vocals start up, the track becomes very repetitive. The combination of the song's lyrics and the melody of the chorus bring the track down a lot. After the Chase also dabbles in some southern rock and country in "Therapy," which they pull off fairly well. The sounds vary throughout, as do the messages. They give us glimpses of their idea of who Jesus was on Earth (outside of what we see in the Gospels) in "Carpenter Man," they remind us of God's unending love and forgiveness in "Be Still and Know," and they also sing in sheer anticipation to their coming baby while he's still in the womb in "Come On Little Baby." I like what After the Chase have to offer, and I think they could really make a name for themselves in the future. I'd like to see more emphasis on the indie/folk aspects, though, as I feel that that is their strong suit. I also appreciate their love for each other, their baby and Jesus that is very apparent in their songs. With more focus on their strong points, and a more cohesive style, they could really go places.