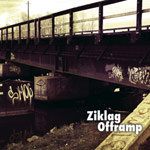 For the Canadian fourpiece Ziklag Offramp, nailing the sound to a single genre can be a bit of a difficult task, and this is very evident in their 2013 independent debut album, Ziklag Offramp. The band's sound contains traces of folk, Americana, southern rock, soul, and country. The varying sounds can partly be attributed to the fact that the tracks aren't all written or composed by the same member of the band; for instance, "Carpenter Song," "Broken," and "Vineyard of Red Wine" are all written by guitarist Chris Pyhtila, and those three songs all tend to be more experimental in nature. "Vineyard of Red Wine" specifically is more unique, as the vocals get a little raspy at times, the guitars vaguely speak of 90s alternative, and the whistle in the chorus is more Celtic than anything. Acoustic guitarist Brian Dunn wrote most of the tracks' music, claiming five of them (though one is only a thirty-seven-second interlude). Dunn's seem to be the strongest tracks, and they're usually of a more acoustic nature than the other musicians' songs. One thing in particular I enjoy about Dunn's songs is that he knows how to write a decent guitar melody, which is apparent in "Mourning Turned To Dancing, Sackcloth Into Joy," the interlude "One Seventeen," and the short closing track "Hallel." The music composition is the strongest element to Ziklag Offramp, and unfortunately, the other elements don't bode as well. Just like the music, the lyrics and vocals are spread around to different band members; in some cases, the band had a non-member write the lyrics, and in a few other cases, the lyrics were adapted from the Book of Psalms. A man named Tim Lappala wrote the lyrics to "Underground," "Two Squeaks in the Night," and "Hold Dearly To Me." The last one I mentioned is pretty solid, with self-depravating and humble lyrics like "Hold dearly to me sons, though I am thin as the mist and slippery as a bead of oil, hold dearly to me wife, though I am faithless as the wind and distant as a dream," but the other two are pretty lackluster, and slightly confusing. It's hard to decipher the message from either one, and the chorus of "Two Squeaks in the Night" is near cringe-worthy ("Mommy moved in her dreamsleep, because she felt you sneaking away, you were a-scared to get caught I guess, so you shrunk down to dots and blinked out, it's quiet in our house today"). Again, I like Dunn's performance here much better, as he's responsible for the adaptation of the Psalms. The weakest part of Ziklag Offramp would definitely have to be the vocal performance; there's rarely a moment where the vocals aren't dry, flat, or just plain uninteresting. Rest assured, there are shining moments ahead, but it can be hard to get past the initial impression they make. Ziklag Offramp has some talented musicians in their line-up, and there's definitely potential to make some kind of impact on Christian rock in the future. Some experimenting with other vocalists, or vocal training perhaps, would be of great benefit to them, and keeping lyricists within the group itself might not be a bad idea either. You can stream the entire album on their Bandcamp page, and if you like it, they have digital and physical copies available there as well. - Review date: 5/10/13, written by Scott Fryberger of Jesusfreakhideout.com