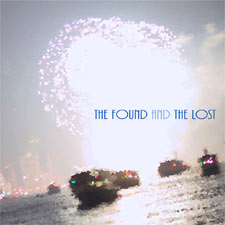 
The Found and the Lost is a one-man electronic project born in the wake of an Austin, Texas-based church worship album. After producing, mixing, and mastering his church worship team's album, guitarist and drummer Vicente Chung continued making music and wound up with a handful of tracks for his own solo project. The Found and the Lost is quite an interesting album. Other than the oddball, mostly-acoustic closer, it's rather synth-heavy, with high-energy electro pop being the name of the game, no doubt taking cues from Daft Punk and early Owl City. "Follow On" has some decent hip hop beats, as does "Free To Surrender," which dabbles more in trap than hip hop (it also bears a striking resemblance to Anchor & Braille's "Watch You Burn"). Whether it's synth pop, rap beats, or trance, the music of the album is enjoyable all around. However, the vocals are another story. I always appreciate people experimenting and trying something new or maybe even outside of their comfort zone, but the overly-robotic voice used throughout all of the non-instrumental tracks is pretty tough to digest. The sound is akin to the character GLaDOS from the Portal games. The lyrics are all beautiful and meant to worship our Savior, but they really get lost in translation. It's unclear if this vocal choice was a result of Chung having lyrics but no one to sing them, or if this was the intention from the start, but it brings an otherwise enjoyable album to a screeching halt. I'd love to hear a fully instrumental version of The Found and the Lost.
- Review date: 3/29/22, written by Scott Fryberger of Jesusfreakhideout.com

The Found and the Lost is an EDM group from Austin, TX who released their debut album in March 2022. The project was born out of Vicente Chung helping his church in the worship ministry as an instrumentalist as well as helping to produce their worship album. The music found on this release is well produced and put together. It's pretty standard for most electronic music like this, but that doesn't mean it's not enjoyable. The album's eight tracks consist of five "regular" songs and three instrumental tracks ("Free to Surrender," "Follow On," and "My Dearest One"). Vocally, the songs utilize autotune heavily -- as a vocal effect and not just simple pitch correction -- and your enjoyment level will depend on how much you like that vocal style. Personally, my two favorite tracks are the hip-hop inspired instrumental "Free to Surrender" and the acoustic guitar and Latin flavored instrumental "My Dearest One." Lyrically, some of Chung's worship background becomes evident. On "Justified" he sings, "But I've been justified by love. I've been saved by amazing grace. I had nothing; I was nothing. But now You are my everything." The Found and the Lost would be recommended for fans of EDM and electronic music in general. An old school Joy Electric fan looking for newer artists could easily find some enjoyment with this new release.
- Review date: 3/25/22, Michael Weaver of Jesusfreakhideout.com