On a stop of the Spring Scars Remain Tour, we sat down with Disciple vocalist (and screamer) Kevin Young to discuss the band's past, present, and future, and what it means to be labeled a "Christian band."
This interview took place on: 2/19/07.

Kevin Young: Honestly, I think we found a lot of contentment in playing shows for 50 people and realizing that what we were doing and what we wanted our band to be about wasn't really about how many people showed up for us. It wasn't really about all those other things. And these things are great. Don't get me wrong, because we love it when there's a ton of people out there. But I think we were at a place where we really learned to be happy with who we were and let the results just happen. I think everybody in life is challenged to find that place in whatever they do. In anyone's situation, you can kind of compare that. We're content with where we were and happy with what God was doing in our lives. Things just kept growing and growing and growing and more people kept coming and more opportunities kept happening. We really don't feel like we're any different and we don't act any different.

Kevin: I think it was more just this sense of at least one person's life being impacted and making a positive impact on one person. There was this sense of "We didn't waste our time tonight." I know that it's so cliché to say that but I really think it happened for us and that it really meant that. We were just happy to be making an impact. Obviously, as you get older and you start a family, there comes a point when you can't rely on that at all. You have to provide for your family. But we were fortunate enough to be kids when this thing started and it was easy to get content.

Kevin: I can go either way with it because I'm not ashamed to be a Christian band but at the same time I think as artists, it's an artist's responsibility in my opinion to be true to themselves and share themselves with their fans. If you're Eminem, you're gonna share yourself. You're gonna talk about whatever you want to talk about. If you're Papa Roach, you're going to talk about the things that are real to them. They're trying to talk about things that are real to them. As Christians, we're talking about things that are real to us and because our music happens to be about Christ, we are given the term "Christian rock band," which I'm not ashamed of. But with everything else, it's all about the music style. Every other category is a music style. No one ever categorizes lyrics except for Christian lyrics. So it's not about our music at that point, it's what we're talking about. Which is fine, and like I said, I'm not ashamed of it, but it would be awesome if we could just get to a point where we were a rock band who was able to be real about themselves and just share Christ and just be lumped in with everybody else.

Kevin: You can go either way. You can be extreme about it, because we are supposed to be not of this world and be separate... well we definitely are that!

Kevin: I don't even know. It's just as long as the guys like it, as long as we like what we're doing. We've reached the point where we're not really trying to cater to anybody when we write songs. We're really trying to dig down and dig deep and express ourselves. As long as at the end of the day we're playing music that is definitely from the heart and we like it. And I don't know what that sounds like and I don't know what it's gonna sound like. This last album we did was so heavy at times and it's got a couple of slow songs. And we don't ever shy away from writing slow songs. You just never know what the next album's gonna be like. I know that it'll be about whatever we're going through at the time and you never can tell what that's going to be.

Kevin: We've worked with one producer our whole career so I tread lightly on that question. *laughs* We love [our producer] Travis a lot and I'd be happy working with anybody but at the same time God's always brought the people he's wanted us to work with so we've never really had to pursue anybody. We've been fortunate enough to work with some really cool people like Joe Breezy who mixed our most recent record and also mixed the last tour record. We didn't search him out; it just kind of happened. So we're open to work with whoever... as long as they're good. *laughs*

Kevin: For this record, honestly, we didn't really know what we wanted to write about. We felt like we wanted to maybe write some things a little heavier this time around just because we had done some things on the last album that we liked a whole lot. But we hadn't really written a song in a while that had a lot of energy and a lot of heaviness to it and we just wanted to do that because we like those types of songs... so we wanted to make sure that we had some good heavy songs on this album. But as far as what we wanted to write about or talk about, I can specifically remember us praying and saying "God, we don't even have anything really to say, so what do you want to say?" It was the praying attitude of "We need help writing these songs," but it actually was probably the best prayer we could have prayed because after that, it just seems like all of these ideas started happening that were really God-centered and God-focused. The song "After the World," which is basically a song from His perspective to the world, was kind of an answer to that prayer. All of those things started happening and we were really happy with where the lyrics were at that point.

Kevin: "After the World" is really special because we've never really had a song that we've written that's from God's perspective. It's like a chill-bone song for us. We really enjoy playing it and really enjoy what it's saying to people. "My Hell" is a cool song too because I couldn't get the theme of it out of my head. I was listening to a preacher and he made a comment saying "Hell has flames and fire and brimstone and all of these other things. We think that's what hell is but it really is Jesus not being there." And I couldn't get that thought out of my head... it just consumed me for days and days and days, just writing about how I felt as a backslider in my late teens. There wasn't any fire or brimstone or anything like that. It was waking up every morning without God in my life. It was just pure hell for me. Just being able to vocalize that was really cool. "Game On" is having an impact more than any other song we've ever written. We knew that it would be a little controversial but it's a song we wrote that as a Christian, how do you confront the War on Terrorism? Not necessarily the War in Iraq or the War in Afghanistan, but on terrorism. It talks about how can you justify fighting and being a Christian and things like that. It was a topic that I got in my head one day that I wanted to tackle and so we did.

Kevin: I don't know. You never know, man. You can literally think of time periods and you can think of musical styles. And you can't just predict what you think of the late 1980's. You can picture bands and you can think of the early 1990's and late 1990's and picture bands. You can think of right now and picture bands... I don't know what that looks like. We're gonna keep being who we are. You can go back on all of our CD's and see that there's a growth and a progression but at the same time we've still maintained and been ourselves. So that's the only thing that I can really guarantee... is that we're still gonna be ourselves through it all and hopefully not turn into a boy band (*laughs*) or any of those other things. We'll see what happens.

Kevin: Well I'm just recently married so... I've learned this whole love is not self seeking...

Kevin: To love someone means that it really doesn't have anything to do with yourself and this is a new concept for me. I've been talking to others about it my entire life but I'm just realizing that it is a difficult thing to put into practice... to love like God loves with this selfless abandoning. It's hard to do that. But my wife and I are learning to love each other that way.

Kevin: About six months ago. So that's what He's teaching me right now. 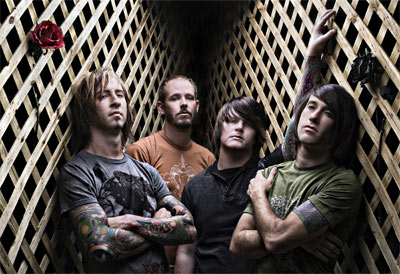