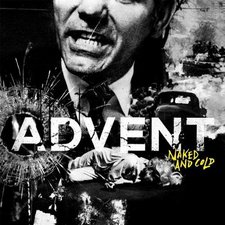 Naked and Cold
by Advent

The American way. I pray to God this lie will have nothing to do with me. American way. The lie of the century told by the great deceiver laid down as a law of the land. To question is the greatest of sins. So we raise up our flags. Call ourselves the chosen sons of God. Add another link in the chain. Get in line. Assimilate. Its your call to be true to red, white, and blue. But is there something truly wrong when we drape the flag over the Cross? You say freedom isnt free, but who the Son sets free is free indeed. Were freed by His name, not by homeland security. I will never be ashamed of my Redeemers mighty name and I will never run and hide, hide under the flag of violent pride.