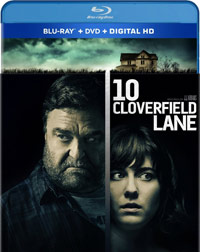 After getting in a car accident, a woman is held in a shelter with two men, who claim the outside world is affected by a widespread chemical attack. (from IMDB.com) 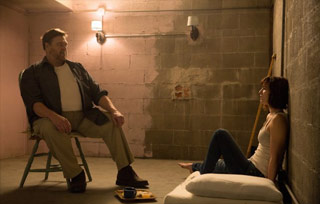 It probably should surprise no one that a movie like 10 Cloverfield Lane would be kept almost completely secret up until less than 2 months before it released to theaters, mostly because of a name like J.J. Abrams attached to it - even if it is only as a producer. But what might even be more surprising is that this mysterious movie received mostly stellar reviews, making it even more curious due to its minimal fanfare leading up to the release. But among these questions is the movie's curious title. How is it related--if at all--to the 2008 film Cloverfield.

I'll start off with a spoiler-free portion of this review. But as I discuss content, it's near impossible not to give away some of the reveals in the film. The trailers for the film give a pretty good idea of what you can expect herein. Most of the story occurs beneath the earth in a bunker made by a conspiracy theorist who takes in an injured girl named Michelle. The last thing she recalls is getting into a car accident before waking up in a strange--and barren--concrete room. Her only roommates are an older man named Howard, played by John Goodman, and a 30-year-old man named Emmett. Michelle's mind is filled with questions as she tries to figure out who her bunker-mates are and if there really is any danger in the outside world, warranting their isolation. 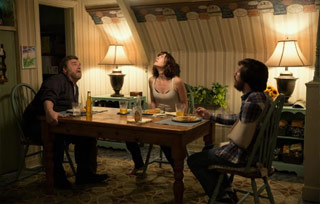 The small cast is lead by Mary Elizabeth Winstead, who is no stranger to the horror genre. She's quite good as the resourceful and strong Michelle, while John Goodman is amazing as a character who can be just as warm and charming as he can be utterly terrifying. He's a big guy with a deep voice, and here he's just really creepy and menacing. John Gallagher Jr., who plays Emmett is a nice addition to the mix. He and Winstead play off each other wonderfully as well. He fits the role of an average Joe kinda guy really well. You're aptly left wondering just what his role is in this mystery, and Gallagher seems to hit all the right (and necessary) notes.

Now here's where you're going to want to stop reading if you want to avoid spoilers. I will address the content here in some detail, so if you want to know what you'd be in for when seeing it, you'll want to keep reading. Firstly, how does it fit in with Cloverfield? I'd say it's possibly within the same "world," but don't expect to see the monster from that film. Cloverfield took place in New York City and this film is somewhere in rural Louisiana, so the location is far more removed and remote. As far as the content goes, I have to admit it pushes the PG-13 envelope quite a bit. I tend to stay away from straight-up horror or psychological thrillers and 10 Cloverfield Lane is a mix of those genres and sci-fi. There's a surprising amount of gory/bloody content, too. Given the way it was delivered too, it is likely to be quite unsettling to some viewers. And it's that aspect that I felt pushed the boundaries of the rating toward a more rated-R feel. The bloodier content starts when we see a person's face is slightly deformed and bloody. That person also then slams their head against a window violently, leaving blood on the glass. It then continues with a brief closeup of someone stitching up someone else's cut. These are just a couple of the many disturbing moments in the film, too. In one of the most shocking moments, a character is shot in the head off screen and we then see a close-up of blood splattered on the wall with some gore slowly dripping down. We also later see the body half-dissolved in a tub of acid and the remains looking pretty bloody. Another dead body is shown 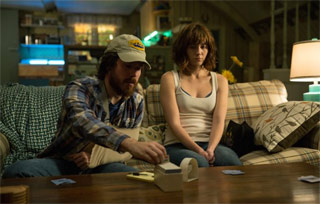 looking kind of mauled, while we see a pair of unrecognizably gory pig carcasses behind a fence. Finally, a character falls into a pool of acid and we see flashes of their bloody and burned skin during an intense scene. If horror isn't your cup of tea, this will all be pretty intense stuff. As far as the other content goes, there isn't really any sexual content, and the language is very infrequent, although Michelle utters a completely unnecessary use of the notorious "F" word just minutes before the credits roll.

OK, that's it for spoilers. As a film, 10 Cloverfield Lane is pretty well-constructed. Fans of 2008's Cloverfield should get enough out of this movie to be satisfied, but this is hardly a sequel to that film. I'd say the feel of 10 Cloverfield Lane is more like a marriage of I Am Legend and Secret Window, so fans of those kinds of films should find a lot to like about this creepy thriller. While it was well done, I have to admit there are some pretty disturbing moments in the movie, so I advise viewers to proceed with caution.


10 Cloverfield Lane arrives on Blu-Ray in a 2-disc Blu-Ray/DVD combo pack with a digital copy and also on DVD. The film's picture is crystal clear and offers the following bonus features...

Commentary by Director Dan Trachtenberg and Producer J.J. Abrams - I listened to a good chunk of the feature-length commentary track and it was interesting to hear first-time director Trachtenberg chat with Abrams, especially after the success of The Force Awakens. They're both intriguing to listen to, so I do recommend checking it out if you like commentaries (However, Abrams did let at least one uncensored use of the "F" word fly while I was listening.)

Featurettes (34:42) - All of the bonus features are lumped together as "Featurettes" with a "Play All" feature. It's all good stuff here, too, but it does feel like it could have just been a tad longer or more detailed. (And don't watch any of them unless you've already seen the movie.) The featurettes are broken up into the following sections:

Cloverfield Too - Here, Abrams talks about this movie being a distant cousin to original 2008 entry. This segment covers Mary Elizabeth Winstead's character in detail, while they address how this movie takes a look at different kinds of "monsters" than the original Cloverfield. The other central characters are also covered here as well.

Bunker Mentality - This chapter is about constructing and designing the bunker. It's cool to hear about how they conceived the different aspects of the bunker.

Duck and Cover is a short piece about dressing Mary in the shower curtain and the material they needed to use to make it fit her well.

Spin-Off - This isn't what you'd expect from its title; it's actually about how the filmmakers really tried to use as many practical effects as they could. We hear how they created a special gimbal for trucks and cars to be spun and tilted and then see some great behind-the-scenes footage of the filming.

Kelvin Optical is about a department of Bad Robot dedicated to the effects of the film. They talk here about how they made it like you would an indie film and kept it secretive. We then see some details about the visual effects and even how they designed the sound effects (mixing all kinds of familiar sounds together to make other sounds).

Fine Tuned is about the film's score by Bear McCreary. Bear talks in detail about the technical side and different musical themes and using unique sounds and instruments. He's actually really exciting to listen to. (And as a huge fan of the original Ghostbusters film, it was neat to hear that McCreary's mentor had been the late Elmer Bernstein, who scored the 1984 film)

End of Story sums everything up, with Abrams relating this film to the original Cloverfield.

Sex/Nudity: There is none, but we see Michelle in just her underwear in a few scenes, or in a tank top showing some cleavage.

Blood/Gore: SPOILERS AHEAD (you've been warned!) Michelle wakes up to find an IV in her arm and some blood on the side of her head; Emmett has a large bruise and small abrasion on his shoulder from an unspecified injury; We see two very gory pig carcasses behind a fence; A person is hit in the head with a bottle and we see a deep bloody cut there; A person is seen through a window with deformed, burned skin that looks swollen and slightly melted. They bang their head on the glass repeatedly, leaving a bloody mark; We see a closeup of the aforementioned head cut being stitched; A bloody earring is found on the ground; A person is shot in the head off screen and we see blood splattered all over the wall as some of it slides down slowly; We briefly see half of a body sticking out of a tub of acid with blood all over their head; A person gets acid all over them and screams as they try to get out of a puddle of it. Later we see the side of their head is all bloody and burned (like an ear might be missing), while their hand is bloody and missing skin; We see a dead body lying on the ground and a brief view from behind the head of the person that appears to be a little mauled and gory; Michelle gets a cut on her leg and we see some blood on her clothing.

Violence: A car is sideswiped by a truck and we see the car flip off the road; Michelle awakens to find her leg chained to a pipe in a cement room; Michelle starts a fire in her room and sharpens a crutch to use as a spear and attacks Howard, who pushes her down; Howard bangs his fist on a table and screams at Michelle; A person hits another person in the head with a bottle and runs away as the other person pursues; At a door, a person bangs on a window begging to be let in. They then bang their head repeatedly on the glass as well; We briefly see a pair of mauled pigs in a pen outside a window; We see the word "help" scratched on the inside of a window; A person threatens others with a barrel of acid; A person is suddenly shot in the head off screen; Two people get into a scuffle and one of them knocks a bunch of stuff over on top of the other as they run away. We then see a body half-dissolved in a tub of acid as they run by. The pursuer catches up to the victim, who then pushes over a barrel of acid onto them and runs away. A wire sparks a fire and the room starts to burn. As the victim escapes through a vent, we see a knife suddenly stick through it several times. The attacker also grabs the victim by the hair before they escape; A person hits a padlock repeatedly in desperation; A person is pursued outside and we see some explosions. A bottle of liquor is lit on fire and tossed at an attacker, causing another explosion; We see the bunker explode in a ball of fire; A speeding car knocks over a mailbox. Disclaimer: All reviews are based solely on the opinions of the reviewer. Most reviews are rated on how the reviewer enjoyed the film overall, not exclusively on content. However, if the content really affects the reviewer's opinion and experience of the film, it will definitely affect the reviewer's overall rating.