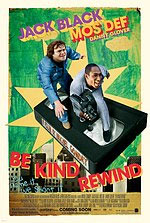 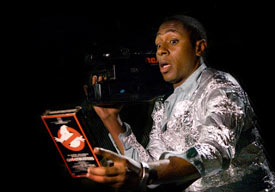 A man (Jack Black) whose brain becomes magnetized unintentionally destroys every tape in his friend's (Mos Def) video store. In order to satisfy the store's most loyal renter who wants to rent Ghostbusters, the two men decide to film their own version of the movie themselves, not realizing it would lead to the pair remaking every movie in the store that customers ask for...

It's kind of a surprise to find a filmmaker like Michel Gondry making a film like Be Kind Rewind. Probably his most widely known movie prior to this one would be his 2004 indie romantic comedy Eternal Sunshine Of The Spotless Mind - a movie I've enjoyed unashamedly in an edited form (R.I.P. "Clean Films"). For that flick, Gondry used the unusual premise of showing a relationship in a distorted way played backwards through the mind of a man as his memory is being erased. His cinematography was imaginative and intriguing, but sadly its unedited form was made for "adult" audiences under an R rating. Be Kind Rewind is a light-PG-13 comedy with an almost as-quirky premise, as a small New Jersey town VHS video rental store is forced to refilm several popular movies when the tapes get demagnetized. While the film bears some of the same touches Gondry brought to Eternal Sunshine, Be Kind Rewind is almost Capra-esque... on crack.

I say "Capra-esque" - hesitantly and lightly I must add - because of the mindset of the film. See, the VHS store, owned and operated by an older man who hasn't upgraded at all to DVD's and has only one copy of each movie in his store's inventory, serves as kind of a nostalgic and sentimental setpiece. The story takes place in a smalltown setting, given the tight community feel that you probably don't actually have today in a New Jersey town, and when the store's existence is jeopardized to make way for big budget condos, the town starts to come together in support of this obsolete video store. In some ways, it's a bit of The Majestic meets Batteries Not Included, with that naive little outlook on life and even patriotism... through just a touch of Frank Capra. Be Kind Rewind is a nod to the YouTube amateur filmmakers of the world and a nod to the love of movies and storytelling in general. That in and of itself gives it a bit of charm... Charm that's carried through by underdog "loser" type characters played by Jack Black and Mos Def.

The most fun to be had in the film is when Black and Def begin recreating movies for their patrons. The longest of all parodies is their first pick, and this reviewer's personal favorite in actuality, Ghostbusters. While I'm partial to the real film, it's fun to see a movie like Be Kind Rewind pay sort of a silly tribute to it almost twenty four years later, and the way they do it is quite fun. Almost seemingly completely random, Rush Hour 2 gets the next treatment, and we then just see glimpses of homages paid to movies like Men In Black, Driving Miss Daisy, The Lion King, Robocop, and Carrie. A lot of the comedy is clever and silly in a screwball fashion. And when Ghostbusters' own Sigourney Weaver shows up playing someone to enforce the copyright infringement laws, it's confirmed that Be Kind Rewind is having fun in their own little alternate reality. 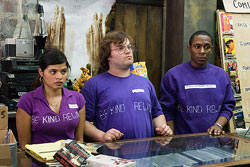 The only problem with the flow of Be Kind Rewind is that it seems a bit undecided in the kind of tone it wants to reside in. By the end of the film, it's full-on in "heartwarming" mode as it tries to get the smalltown unity vibe across, while threatening to lose the audience hooked on the film's early shenanigans. While I can appreciate what Gondry (who also wrote the script) was aiming for with the film's story, Be Kind Rewind is at its strongest when it's not trying to tug at the heartstrings. But Black and Def are a great team with firm chemistry as friends, with the latter playing the straightman most of the time to Jack Black's eccentric behavior as Jerry.

The film earns its PG-13 rating by including a few sexual comments in conversation - the worst being mostly subtle references made as Glover's Mr. Fletcher rags on Mike and Jerry for being losers who don't have girlfriends and aren't seeing any "action." It felt wholly out of place, especially for the kind of feel the movie was aiming for, and it really added nothing to the story. While some other non-explicit references are made, there is some language the MPAA does not account for, although not frequent or extreme, that includes a couple uses of blasphemy and at least three uses of the "s" word. It was rather refreshing for the content to be pretty mild - especially for a PG-13 movie these days that contains Jack Black - but I wouldn't be surprised if some of the junk that found its way into the film was there only to keep it from a PG rating (and therefore possibly dissuading the teen and college age crowd from attending what they might write off as "a kids movie"). Some PG films in recent years have had more language than Be Kind Rewind, but this movie still doesn't exactly have the feel of a family film (although with just a little editing it could have passed for one).

Be Kind Rewind may not be the funniest film you'll see all year, but Gondry, Black, and Def are a pretty convincing team as they band together for this little indie ode to movie making. Movie buffs and diehard fans of any of the leads or the director will most likely appreciate Be Kind Rewind more than the casual moviegoer, which is most likely the reason the film isn't getting a very wide release. Fun, imaginative, clever, inventive, but a little rough around the edges in content and storytelling, Be Kind Rewind is a decent film, but still leaves the feeling like it could have been something greater. As always,

Sex/Nudity: Jerry, Mike, and Mr. Fletcher sit around a table and Mr. Fletcher gives the guys a hard time about them not getting any "action" (as in sex). He mentions that at their age, his "balls were flapping" a lot as he was sleeping with a lot of women. He then teases Mike that he's "playing a trumpet solo" (probably a masturbation reference), and the scene ends there; After the tapes were erased and a woman wants to rent Ghostbusters, Jerry tries to dissuade her from renting the blank tape by saying "I think has a lot of nudity in it." (which it doesn't); In quoting Ghostbusters during one scene, Jerry asks a character if they are "menstruating;" During a montage of movies the guys are acting out, we see Alma and Jerry fully clothed on a bed as they throw a blanket partially over each other and make goofy sounds, commenting that they are having sex as they act out Boogie Nights (not realistic at all, and nothing explicit is seen or done); When Jerry is supposed to "kiss" Wilson in a scene they act out for Rush Hour 2, he complains that he doesn't want people to think he's having a homosexual relationship with his mechanic; We find out a store owner is sleeping in his store in the adult video section (but we don't see any covers and he's not in there for any other purpose but to sleep in the room)

Blood/Gore: We hear Jerry vomiting on two separate occasions. After the second, Jerry urinates in the street and we see his exaggeratedly yellow pee stream as it attracks metallic objects down the street

Violence: Jerry is electrocuted at the power plant; Mike hits Jerry on the head with a frying pan several times to demagnetize him; In a film, kids pretend to be shot; In other films, characters pretend to beat on each other as in boxing or shoot each other in gang fights, etc. Disclaimer: All reviews are based solely on the opinions of the reviewer. Most reviews are rated on how the reviewer enjoyed the film overall, not exclusively on content. However, if the content really affects the reviewer's opinion and experience of the film, it will definitely affect the reviewer's overall rating.