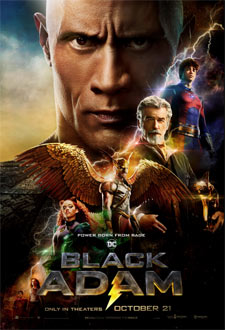 Nearly 5,000 years after he was bestowed with the almighty powers of the Egyptian gods-and imprisoned just as quickly-Black Adam is freed from his earthly tomb, ready to unleash his unique form of justice on the modern world. (adapted from IMDB)

The very (very, very...) long in development DC superhero vehicle for Dwayne "The Rock" Johnson, Black Adam, is finally here. The story centers on an anti-hero named Teth-Adam who uses his powers to free the oppressed, but does so in a violent and lethal way. His sudden reappearance in the world leads a ragtag team of D-list superheroes, calling themselves the Justice Society, to track him down to stop him. It seems silly for them to think they can defeat someone as powerful as Black Adam, but it doesn't stop them from trying.

Admittedly, I have no knowledge of Black Adam's comic book history, but I do know he's linked to DC's Shazam, and seems to have some ties with Superman (and thanks to Dwayne Johnson, Henry Cavill is back in the blue-and-red as Superman for at least a little while longer). The film does give Black Adam ties to the Shazam lore, even having it be his keyword to transform to and from his super form (just like Shazam). I'm really curious as to where Black Adam fits into the cinematic Shazam world going forward, as well as the rest of the DC cinematic universe.

As a movie, Black Adam is kind of hit-and-miss from start to finish. It has moments of sheer comic book movie glee as well as moments of pure cringe, keeping it from really making a lasting impression. And this isn't at all due to Johnson's solid performance as the title character. If anything, it has a lot to do with a bunch of the film's other characters and some story beats that feel like they're part of a totally different movie. For starters, I'm just going to call it like it is: The Justice Society is lame. Like, really, really lame. While I did enjoy seeing Pierce Brosnan as Dr. Fate, his pupils - Hawkman, Atom Smasher, and Cyclone - are bottom of the barrel grade superheroes. To make matters worse, each of them has a much better Marvel cinematic counterpart that really hurts these DC iterations. I completely understand that both comic worlds have similar heroes and villains, and that DC may even have had some of them first, but I can't shake at how counterfeit these heroes feel here. For example, when Atom Smasher (played by Mark Ruffalo soundalike Noah Centineo) and Cyclone (Quintessa Swindell) are alone on Hawkman's (Aldis Hodge) ship, their interactions and performance feel more like a CW show than a feature film (and that's not a good thing). Everything from their acting to their costumes just screams cheese. Centineo tries to be charming, but his "Giant Man" powers feel like a dollar store version of Paul Rudd's Ant-Man, and Swindell's Cyclone just feels like the poor man's version of Halle Berry's Storm. Heck, even Brosnan's Dr. Fate is like Professor X mixed with Doctor Strange, just not nearly as cool or memorable as either of those characters. This all almost feels like a big budget Sweded version of X-Men: Origins, and it's kind of sad. 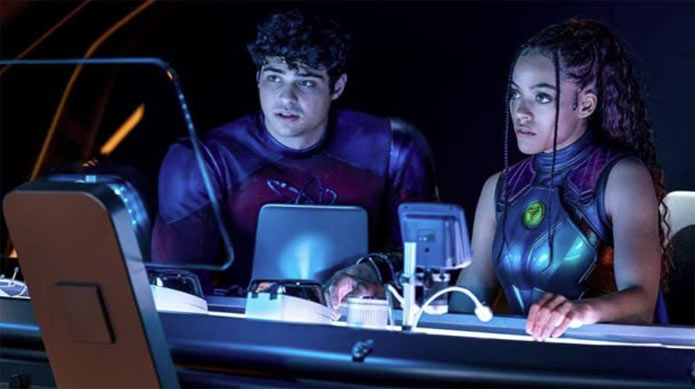 Otherwise, Johnson knocks it out of the park as Black Adam. He plays it quite serious, which makes sense for the character, and he never feels too much like "The Rock." Person of Interest's Sarah Shahi is basically the film's female lead, who awakens Black Adam in a way that is reminiscent of The Mummy (yet, it's intentional rather than accidental). It's about time Shahi was given a prominent role like this in a blockbuster movie. Bodhi Sabongui plays her son, Amon, who takes to Black Adam pretty quickly, and gets into the kind of trouble that helps Black Adam rethink his actions. Amon is clearly here to connect with the young viewers, but the ultra violent content makes it feel much less like a family affair. Unfortunately, the movie goes overboard with Amon's story, leaning too heavily on his skateboarding and street smarts, and discarding all logic, hindering the movie's tone.

Speaking of the violence, this is the film's biggest red flag. When Black Adam awakens, we see him lift a man up by the throat and then burn the guy all the way through, seeing his skin melt off and him burn to a skeleton before Adam snaps the bones in his hand. He often burns his victims at their core with lightning, and at one point, we see a dismembered forearm drop to the ground and be focused on in-camera. There is some blood in other scenes, like when a man falls off a cliff and we see blood in his mouth and on his face as he's dying. Later, a heavyset man is shot in the stomach and we see a small bloody spot on his clothes as he falls back. We see him again a scene or two later, lying on the floor holding his blood-covered hands over the wound. Otherwise, language is infrequent but present, with about 7 uses of the "S" word, a few of "*ss" and "h*ll," and 1 of "Oh G-d." There's also no sexual content to note. The story does deal with how an ancient crown was endowed with the spirits of demons, and when the film's villain dons the crown, we see him in Hell before he comes to life with a Satan-looking appearance. He has two big ram's horns on his head and an upsidedown star engraved on his chest. I, personally, found the imagery uncomfortable on a spiritual level, but the story makes it clear that this is pure evil, and it's definitely rewarding when we get to see it be defeated. 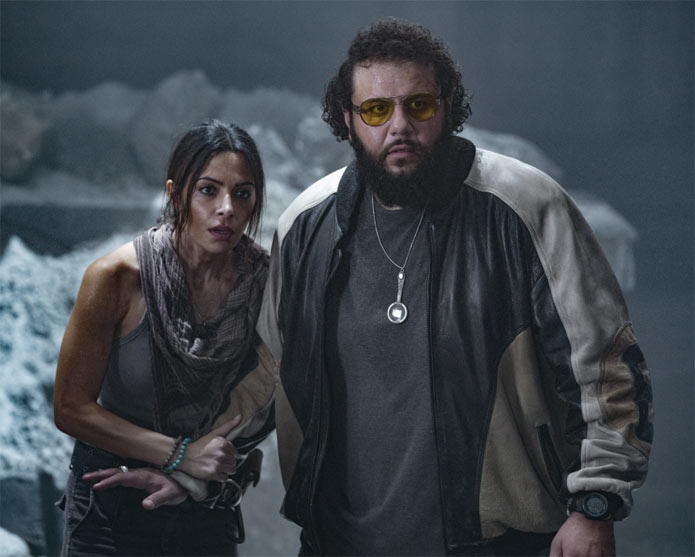 The movie's theme seems to question what it means to be a hero, and what a hero looks like. Black Adam ruthlessly slays his victims -- mainly "bad guys" who are oppressing innocent people -- and when the Justice Society condemns him for it, Shahi's Adrianna calls the Society out, asking them where they were when her people needed their help. She makes a valid point, but Black Adam's method of handling things is questionable at best. At the very least, this movie might spark some interesting conversations.

When the dust finally settles on the mixed bag that is Black Adam, we have a movie that isn't nearly as good or well-constructed as even other DC entries, like Shazam, Wonder Woman, or Man of Steel. The DCEU may be struggling to pull itself together -- and is positioned to surprass Marvel in quality if they play their cards right -- but Black Adam is not the movie that will do it. It's further proof that the DCEU still needs help figuring out what it wants to be. Is it still an entertaining romp? Sure it is. But could it have been better, if not even much better? Absolutely. And after all the efforts made to finally get it made, it should have been.

Blood/Gore: We see a slave stabbed with a spear just off screen and then thrown from a cliff. We see him falling in slow motion, with a trail of blood flowing from him as he slowly falls; Black Adam appears and grabs a soldier by the throat, setting his body on fire. His clothes burn up and the skin quickly melts off his body and he turns to bones and ash as Black Adam crushes his bones in his hands; Black Adam often burns his victims at their core with lightning, and at one point, we see a dismembered forearm drop to the ground and be focused on in-camera; A man in Adrianna's entourage falls off a cliff and we see blood in his mouth and on his face as he's dying; A heavyset man is shot in the stomach and we see a small bloody spot on his clothes as he falls back. We see him again a scene or two later, lying on the floor holding his blood-covered hands over the wound; We see the charred body of a man after an explosion; A creature is torn in two vertically, with molten lava at its center, not blood or gore.

Violence: A man stabs another man and then throws the victim off a cliff. We see them fall in slow motion, leaving a trail of blood in mid-air; We see a young boy held down to be be-headed in execution, but he disappears and reappears elsewhere; A man suddenly hits the ground and we hear that he was injured before being thrown from a cliff (he's bloody and can barely speak); Black Adam appears and grabs a soldier by the throat, setting his body on fire. His clothes burn up and the skin quickly melts off his body and he turns to bones and ash as Black Adam crushes his bones in his hands; Black Adam smashes, kicks, fries with lightning and punches many bad guys. At one point, he's moving really fast, so everyone is kind of paused, and he shoves a grenade into a man's mouth. When the speed resumes, the man pulls out the grenade and we see an explosion in the distance; Black Adam often throws his victims far distances where they land and die far away; Hawkman, Dr. Fate, Cyclone and Atom Smasher fight Black Adam in a violent and destructive sequence; Black Adam smashes through walls many times, especially in Amon's house (and bedroom); Dr. Fate sees quick flashes of the future, including a character dying; Black Adam often burns his victims at their core with lightning, and at one point, we see a dismembered forearm drop to the ground and be focused on in-camera; A man in Adrianna's entourage falls off a cliff and we see blood in his mouth and on his face as he's dying; A heavyset man is shot in the stomach and see a small bloody spot on his clothes as he falls back. We see him again a scene or two later, lying on the floor holding his blood-covered hands over the wound; A flashback shows a boy getting hit by an arrow and dying; Black Adam smashes through buildings several times; A character sacrifices their life to save others; A character is stabbed and presumed dead, but we learn it's just an illusion; A child's life is threatened and we see in slow motion as a gun fires a bullet at his head and Black Adam jumps to deflect the bullet; A creature is torn in two vertically, with molten lava at its center, not blood or gore; and lots of other superhero violence. Disclaimer: All reviews are based solely on the opinions of the reviewer. Most reviews are rated on how the reviewer enjoyed the film overall, not exclusively on content. However, if the content really affects the reviewer's opinion and experience of the film, it will definitely affect the reviewer's overall rating.