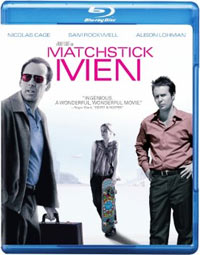 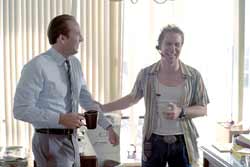 If there's a sucker born every minute, these guys will work the delivery room. Meet Roy and Frank, con men who plan to flimflam a flimflammer out of big-time dough. They have a new partner to help them too: Roy's long-absent 14-year-old daughter, who has entered his life and is eager to learn the art of the con. Just when you think you have it figured out you don't, during this acclaimed comedy thriller directed by Ridley Scott. Nicolas Cage is winningly quirky as Roy, genius at crime and basket case in life because he's an agoraphobe, a germaphobe and suddenly a parent. Sam Rockwell is wily Frank. And Alison Lohman plays the wild child at Roy's door. For fun, suspense and brain-busting twists, nothing's hotter than Matchstick Men.

Matchstick Men isn't your typical crime movie. It's clearly not an Ocean's 11, but it's nonetheless a finely crafted film. Director Ridley Scott is best known for films like Alien, Blade Runner, and Gladiator, so Matchstick Men seems as quite an interesting choice for him. The story plays out from a relatively realistic angle. Nicolas Cage's character as Roy is fleshed out beautifully, giving him a well-rounded neurotic personality. Cage is excellent as a kind-of agoraphobic OCD con artist who is really his own worst enemy. The rest of the cast does quite well, too. Sam Rockwell, who I loved in Galaxy Quest, was excellent as Roy's partner, as well as 22-year-old Alison Lohman as Roy's 14-year-old daughter. The story begins with a relatively serious feel with most of the comedy being light and subtle, offered via Roy's idiosyncrises or the interaction between Frank and Roy. Although not exactly a "buddy film," the connection between these two is classic. In fact, I would have liked to have seen more interaction between them. 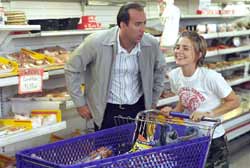 As a whole, the movie came as a surprise to me. The commercials and trailers don't really give you a solid idea of what to expect. While the premise of Roy being obsessive-compulsive might feel a little As Good As It Gets to some, it's presented fresh here, and once past the film's opening scene, you forget all about Jack Nicholson's Oscar-winning role and concentrate on another fantastic performance. What sealed the deal as the defining moment of the film, is the film's conclusion. It's a surprise ending (that is, if you haven't read the book) that makes this film worth repeat viewing. But the film is not without its flaws, and some of the movie's content didn't sit well with me.

It doesn't really surprise me, but the language in Matchstick Men felt kind of heavy at times as Roy utters the "f" word to his psychiatrist at one point and mouths it in frustration in another scene (As does Frank during a heated scene). A handful of other profanity, including "s" words and an assortment of blasphemy, are sprinkled throughout the film's dialog. However, it was a bittersweet surprise to hear Roy reprimand Frank for using blasphemy (Something I later learned was Cage's idea for the character). Violence is kept to one rather surprisingly dark scene that was presented in such a realistic vibe that it was borderline disturbing (but will seem light to those used to much grittier violence). Another thing that disturbed me was the film's portrayal of a fourteen-year-old girl. Being pretty independent due to her broken family, Angela would take beer from Roy's fridge, smoke, and use profanity. In fact, in one instance, as a form of bribery with her father, Angela begins describing that she'd done stuff with boys that would make him throw up. Regardless, Roy did little to reprimand her behavior, but given his compromised moral standards, it isn't really all that surprising.

The bottom line is I enjoyed the story and the character depth and Cage's and Rockwell's characters, but the content gets seemingly unnecessarily edgy at times. On a story/art level, I think it's a strong enough film (that is actually better with a second viewing), but I felt the content bogged the movie down for me some. Fans of quirky, indie-style Hollywood productions--or of any of the cast--probably won't want to miss this one.


Matchstick Men makes its Blu-Ray debut in 2015. The Blu transfer is quite nice, but the film definitely shows some grain to it, so it looks a little dated in comparison to today's new films coming out in high definition. Still, if you're a fan of the movie, it's never looked better.

There doesn't appear to be any new features on here. Included, however, is a standard-definition documentary about the making of the movie. I'm assuming this was on the original DVD release. In addition to the documentary is a feature commentary by Ridley Scott, Nicholas Griffin and Ted Griffin.

Tricks of the Trade: Making Matchstick Men (1:11:46) - This feature-length documentary is in 3 parts. It's presented in standard definition and is a pretty comprehensive look into how the movie came to be. It opens with the pre-production planning, and how Ridley Scott decided to spend several months he had available between movies on a little production like this one. He talks about casting, and we see Scott and the crew meeting with Cage and Lohman to talk about the story. It then moves to the actual production of the film, showing where they filmed some things and even showing on-set footage of stuff as it's being filmed. It all ends with post-production where we see some deleted moments, hear what they learned from test viewing groups and how Hans Zimmer approached the music. As a side note, this documentary is really inconsistent with how it treats profanity. Some of the interview segments bleep out profanity while we'll then see on-set footage of Ridley Scott randomly dropping the "F" word or another crew member using it. I found that to be pretty unnecessary in the long run.

Sex/Nudity: We see some scantily clad women pole dancing and dancing suggestively in a strip club (but see no explicit nudity except for women who just plain aren't wearing much); Angela suggests that she's fooled around with guys before. We see Roy's bare butt as he's running in a hospital gown that's open in the back.

Alcohol/Drugs: Angela smokes and drinks a little. Some people drink in a bar. Frank and Roy have some drinks. Roy is a chain smoker.

Blood/Gore: Frank's face has some blood on it after being punched. We see him spit some blood out; We briefly see some blood on a man's hand after he's been shot and he touches the wound (the scene is dimly lit).

Violence: A man chases after a car with intent to harm the driver; Frank and Roy are held at gun point; Frank is beaten (off camera, we see his face is swollen and a little bloody); A man is shot; Roy is hit over the head and knocked out. Disclaimer: All reviews are based solely on the opinions of the reviewer. Most reviews are rated on how the reviewer enjoyed the film overall, not exclusively on content. However, if the content really affects the reviewer's opinion and experience of the film, it will definitely affect the reviewer's overall rating.