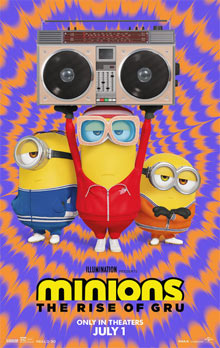 Minions: The Rise of Gru

The untold story of one twelve-year-old's dream to become the world's greatest supervillain. (from IMDB)

I'm actually not quite sure when I saw the Minions movie that had released in 2015, but when I did, it kind of just had confirmed my original decision to not see it in theaters. The movie was an attempt to give the beloved yellow, gibberish-talking minions from the Despicable Me franchise an origin story, taking them all the way back to their creation at the dawn of time. The movie is kind of all over the place; it feels like a collection of ideas and skits strung together as a journey for the minions to find the ultimate villain for them to follow. After unsuccessful pairings with Dracula, a T-Rex, and other villains, they found Scarlet Overkill, who is delightfully voiced by Sandra Bullock. The movie is downright silly (and sometimes needlessly crass), and definitely a departure from the Despicable series. But as the movie ends, the minions meet Gru when he's still just a little kid, and so begins their journey with one of the world's most beloved supervillains.

Five years later, in 2020, fans were promised a Minions sequel, but the pandemic scare derailed its release... for two years (earlier this year, it was even suggested the film wouldn't release until 2023, but thankfully they changed their minds about that). A local theater of mine still has the teaser poster up outside the theater that they hung over two years ago; it's now a sad, whiteish-yellow and wrinkled sight. Since the first Minions ended with the lovable trouble-makers finding Gru, the Minions sequel is appropriately Minions: The Rise of Gru. This is the story about how Gru pursued his life of villainy at such a young age. ("11 and 3 quarters," to be exact.)

While 2015's Minions was more of a haphazard mess, The Rise of Gru has a much stronger narrative. The first film gave the spotlight to three minions in particular: Kevin, Stuart and Bob, and here the trio once again get the main focus. However, this time, they also share the spotlight with a little Gru, still voiced by Steve Carell. It's great because it captures much more of the feel that makes Despicable Me so good, even if it lacks the heart that the three little girls brought to those stories. Still, the younger Gru is less grumpy and more optimistic, which also is a great way to show Gru's growth over the series. In this story, he feels as though he doesn't need the minions, so they try to prove themselves and, obviously, end up winning him over. But probably one of the most fun aspects of this story is seeing Gru's unbridled admiration for a league of supervillains, called the Vicious 6, and seeing him meet some "nefarious" familiar characters - also at a younger age - along the way. It's definitely a fun movie no matter which way you slice it.

However, there does seem to just be a little something special missing from The Rise of Gru, and I can't quite put my finger on to what that might be. Perhaps it's that it's not as funny as it could (or should) be, or that the best gags were spoiled in the trailers (like the minions taking over an airplane flight to San Francisco), but it just doesn't quite have the impact that the Despicable movies do. And when the movie shifts its focus from Gru to the minions exclusively, it again feels a little off. (And, to be honest, I love the minions, but maybe they just don't work well enough to headline their own movie. Gru's presences this time really helps to buffer that). Still, The Rise of Gru remains entertaining throughout, with great vocal performances, a fun and funky soundtrack, stellar visuals, and excellent animation. My son and I saw it on IMAX, but I don't really think this is a movie that necessarily begs to be seen in large format.

The content for Minions: The Rise of Gru is often violent, but always comedic and silly. I'd say it's less vulgar (well, like I said, "crass") than the 2015 movie (like less fat guys dancing almost naked and stuff), but because the focus is still on our heroes pursuing villainy, it's an odd things to be rooting for. However, Gru and company, as usual, are the lesser evil, and the story becomes more about misguided evil, with a lower case "e," so to speak, fighting greater Evil. And since we know Gru eventually takes the straight and narrow for his adopted daughters, we know this kid will eventually turn out okay. There is no profanity or blasphemy, but one of the villains in the Vicious 6 is called "Nun-Chuck" and is literally a Catholic nun who uses rosary beads and a cross-shaped nunchuck as weapons. As other villains fly on jetpacks or use vehicles, she seems to descend from above magically. It is pretty funny, and it's meant to be silly, but I wouldn't be surprised if Catholics find it offensive. Otherwise, there is just a lot of slapstick violence and some almost-deaths involving the villains in the film (including two instances where you think someone died, but they did not. There's even a funeral scene that turns out to have a good turn of events). There is no sexual content, but we do briefly see young Gru's bare cartoon butt, as well as at least one instance of a minion like that too. Several minions dress up as girls at times, too, but that's nothing new for the minions, and it isn't done in a way that seems especially inappropriate.

While not as good as probably any of the three Despicable Me entries, Minions: The Rise of Gru is a leap above its Minions predecessor, and a fun prequel to the Despicable trilogy. Fans of that series, and the original Minions, should definitely still check this one out this summer.

Sex/Nudity: We briefly see 11-year-old Gru's bare butt after a shower; We see a minion's butt crack as he is sucked into an airplane toilet upside down and his clothes are suctioned off; Several minions dress up as girls at times, but that's nothing new for the minions, and it isn't done in a way that seems especially inappropriate.

Violence: Wild Knuckles is attacked by little golden tribal robots and we see him crush them in slow motion; A swarm of robots chases Wild Knuckles as he escapes; A man is hanging from a rope high above water when someone cuts the rope and he falls. It's assumed he's dead, but we later find out he survived; There's a car chase through the streets that causes all kinds of destruction and mayhem. It looks like a villain is crushed by a van but we see them bust out of it, showing that they're okay; We see a woman sticking needles into a man lying on a massage table (the sight made my son squirm). She then tugs on the pins in the man's body to make his arms move involuntarily; Master Chow beats up a bunch of henchman using kung-fu; Master Chow tries to teach some of the minions how to use kung-fu and we see them training with lots of slapstick violence; The minions often hit and slap each other; There's a montage where little Gru does some bad things, including shooting people waiting in line at an ice cream parlor with liquid cheese and setting off a fart smoke bomb inside a movie theater; We hear the screams of a shark's victim in a movie the minions and Gru are watching, but we don't see what they see; Some villains demolish a house; We see a funeral for a villain who died, but then we see that they're still alive and had just faked their own death; Little Gru is tied to a clock by his arms so that, as time passes, it'll eventually pull him apart. We see him yell in agony a couple times, and his shirt begin to rip, but he's rescued before anything serious happens; Little Gru is bound to a large record player that has a buzz saw on the needle arm, which is set to kill him in two days (it doesn't); Some villains suddenly mutate into large beasts (which could be scary to some younger viewers), and they fight the minions and Anti-Villain League; We see the minions, who were turned into animals, violently attack the monster villains in slow motion; And other cartoony violence. Disclaimer: All reviews are based solely on the opinions of the reviewer. Most reviews are rated on how the reviewer enjoyed the film overall, not exclusively on content. However, if the content really affects the reviewer's opinion and experience of the film, it will definitely affect the reviewer's overall rating.