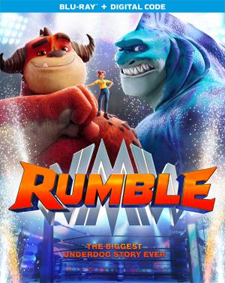 In a world where monster wrestling is a global sport and monsters are superstar athletes, teenage Winnie seeks to follow in her father's footsteps by coaching a loveable underdog monster into a champion. (from IMDB)

When I first saw a teaser trailer for the Paramount+ streaming-service-exclusive movie, Rumble, I remember thinking "That looks like it could be fun!" I was later disappointed to hear it would only be available to Paramount+ subscribers, and I kind of figured I wouldn't be seeing it anytime soon. However, Paramount has since released the film to digital retailers and is debuting the movie on Blu-Ray disc this fall. I wasn't entirely sure what Rumble was going to deliver, but when my 12-year-old son said he saw it at school near the end of the school year a couple months ago and that it was great, I had some higher hopes.

Unfortunately, those hopes were dashed pretty quickly upon starting Rumble. It immediately felt oddly paced and constructed, with animation that looked on par with Pixar... in 2004. As I continued to watch the movie, I realized that wasn't quite a fair assessment as the massive kaiju wrestlers in the film actually had some incredible textures to them. But it's the human characters that look incredibly dated, and their animation oddly dull and lacking the expressiveness that modern animation gives us. And speaking of dull, I don't know why, but I found myself having a hard time getting drawn into the story. To give an example, while I had no interest in seeing Lyle, Lyle, Crocodile and ended up finding it to be a pretty enjoyable (albeit flawed) movie, I had been looking forward to seeing Rumble and really had trouble getting into it. The story seems to kind of drop the audience in the middle of an established WWE-type-wrestling-centric culture where whole cities and their inhabitants pretty much based their entire way of living around "World Monster Wrestling" (AKA "WMW"). We quickly meet a WMW-obsessed teenage girl named Winnie who is the daughter of her town's famed WMW coach, Jimbo, and his monster wrestler, Rayburn. So when her town's current monster, Tentacular, decides to leave the city that practically worships him, it becomes Winnie's mission to save her beloved home and its stadium. (By the way, the absence of Jimbo and Rayburn is introduced as some kind of mystery, so I expected some kind of startling revelation as to where the pair had gone, but the story never resolves this plot point.)

Winnie (really? A girl hoping to "win" matches is named "Winnie"?) is voiced by Geraldine Viswanathan, who does alright capturing the spirit of a passionate teenager, while Will Arnett offers his signature voice talents to the up-and-coming hero of the story, Steve the Stupendous (AKA Rayburn, Jr). Forgive me, but when I think of intense wrestling fans, I don't really picture teenage girls. Obviously, I know they exist, don't get me wrong, but it feels a little odd to me that the human protagonist of the film is a teenage girl who lives and breathes wrestling. Granted, I grew up on the WWF -- Hulk Hogan, Macho Man Randy Savage, Junkyard Dog, to name a few -- before it was rebranded as what it is known as today -- the WWE, so I am no stranger to the wrestling world. And I also usually have no problem following and appreciating movies with female leads, so that's not the issue. But there's something about Winnie's character -- or maybe just the script? -- that lacks... charm? (Maybe Viswanathan's voice just lacks warmth?) I can't quite put my finger on it, but Rumble feels akin to a fully finished and baked cake, with a chief ingredient being accidentally left out. The voice actors all do a decent job with their respective parts, but what we end up with here just seems oddly lifeless and kind of forgettable. When you look at a movie like How to Train Your Dragon or Kung Fu Panda, or even Toy Story, it's somehow easy to get wrapped up in the story and the characters. There's a warm and inviting feel about the whole production. So whether it's tone, pacing, character charisma, the music -- or all of it -- these movies are timeless gems. Heck, Zootopia, Frozen and Brave are just a few titles with strong female leads that tell really strong and/or fun stories in the process. Rumble just never really comes together. (Perhaps its central story's theme and characteristics - minus the wrestling subject matter - have been done much too often?)

And no matter how you slice it, having Rayburn's secret weapon to becoming a winner be his love for salsa dancing is a super bizarre twist. It feels about as out-of-left-field as possible. Maybe they were trying to appeal to younger kids who don't know wrestling, or trying to just appeal to an entirely different demographic, but everything about it felt odd. Rayburn, Jr. isn't being forced to fight like his father; he seems to want to. But when we find him, he's throwing fights illegally in order to make money, so he proves to not really have his father's natural wrestling talents. Winnie keeps trying to mold him into a fighter, and the only way they're able to get him to succeed is for him to throw dancing into the mix. It's just so bizarre.

Anyway, the content for Rumble is mostly wrestling-style violence. None of it is lethal and even the more seemingly brutal moments are lightened up by some comedic touches. I love Will Arnett's voice, and he does lend some charm to Rayburn, Jr, and it was a blast to hear Tony Danza (of Who's the Boss? fame) lending his voice to a character (in this case, the monster trainer, Siggy). There isn't much by way of language, but there are 2 uses of "suck" (as in, "You suck!") and there's a play on words where one person begins to shout, "Holy--" and then it cuts to another person saying "guacamole" as part of an unrelated conversation (to make the would-be expletive not explicit). It's a subtle attempt at suggesting profanity, but it will most likely go over kids' heads. There's also an anatomical joke where Winnie says "Tentacular" (as in the name of a fellow fighter) where it kind of sounds like "testicular," so Rayburn says, "Just to be clear, you are saying Tent-ta-cular, right?" which she then confirms. Again, it'll probably go over kids heads and it's super vulgar to begin with. So, overall, aside from the wrestling violence, the movie is rather tame. But do keep in mind that some of the creatures may scare littler kids, too.

Rumble is a neat idea on paper, but it never really comes together on its own, be it due to poor story structure or a subpar script. It's certainly not the worst animated film you'll see, and it probably will work to keep most kids entertained for an hour and a half, but if you're looking for a new animated classic to add to your collection of family films, Rumble isn't a winner.


Rumble is available on Blu-Ray, DVD, and Digital. The Blu-Ray disc and digital copies have a few extras:

Rumble Digital Copy: I was surprised that, when I redeemed the digital copy on iTunes, it was in 4K UHD. The movie looks decent in 4K, but it doesn't offer the visual quality to warrant the clarity. (Except for maybe Rayburn Jr.'s scaly skin.)

Featurettes (18:05) - there are five short featurettes with a Play All option. Unfortunately, none of them involve the voice talent for the movie!

The Super-Secret Playbook (4:00) - The character of Winnie narrates this one. She spits out some facts about the kaiju (like one of them has 658 eggs or something?) and then details some of the different wrestling techniques employed by the monsters. She pages through the actual "playbook," showing instructions, training scheduling, and example opponents.

The Mon-Stars of Wrestling (4:40) - This one profiles the different characters in the film. (The 2 uses of "suck" from the movie are replayed here)

Salsa with Rayburn, Jr. (2:21) focuses on Rayburn, Jr's love for salsa music and the benefit of adding salsa to your life.

Massive Monsters, Wrestling Moves, and Dazzling Dances (5:14) is about designing the monsters and the different wrestling moves they use. It also covers the dancing shown in the movie and how the animators recorded real dancers in action to use as reference for the animated characters.

Four Rounds in the Animation Ring (1:51) is about the four parts of animation. What they do is play the same short scene over and over in various stages of its finished form.


Deleted Scenes (4:52) - There are five total deleted scenes. Some look like finished animation, while others are in early rough animation. In "Siggy's Apartment" (1:27), we see Winnie at his place trying to get him to coach Rayburn, Jr. "Hitching a Ride" (1:11) shows Winnie running after Rayburn who picks her up to let her ride on him. "3AM Rayburn" (0:31) shows Rayburn in the training ring looking serious and thoughtful. "Fro Yoing" (1:18) is a short scene with Winnie and Rayburn eating froyo and talking. And, finally, "Tentaculade" (0:25) is a mock commercial that Tentacular is involved in.

Sex/Nudity: A fat man with tattoos all over his body is seen many times, and he's always only wearing briefs; At one point, when Winnie says "Tentacular," it almost sounds a little like "testicular," which Rayburn notices and says, "Just to be clear, you are saying 'Tent-ta-cular,' right?"

Violence: In the prologue, We see highly stylized monsters coming out of the ground and punching each other; Kids react in pain to high fives from Winnie; A dog-like monster smacks a person away; The dog-like monster wrestles Tentacular, with related wrestling violence; Tentacular slaps his hand on the arena marquee and cracks it; We see another match with two monsters in more of an underground street match. One monster pile-drives the other, sits on him, and then throws him through windows; We see Rayburn Jr and a warthog monster wrestling; Lady toucan threatens Rayburn; A monster crushes buses on his head and in his hands; A large monkey-like monster chases Rayburn out of the ring and knocks over large stacks of shipping containers on the way back to the ring; We see a man getting his tattoo removed with a laser and yelling in pain; Rayburn throws a huge character out of the ring into the audience as spectators run away; Tentacular strangles Rayburn and throws him into the stands; Tentacular smacks a statue into the air and it lands in the distance; Tentacular strangles Rayburn before a round ends; A spectator is hit with a flying chair. Disclaimer: All reviews are based solely on the opinions of the reviewer. Most reviews are rated on how the reviewer enjoyed the film overall, not exclusively on content. However, if the content really affects the reviewer's opinion and experience of the film, it will definitely affect the reviewer's overall rating.