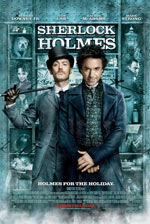 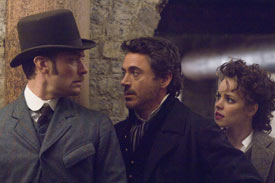 In a dynamic new portrayal of Arthur Conan Doyle's most famous characters, "Sherlock Holmes" sends Holmes and his stalwart partner Watson on their latest challenge. Revealing fighting skills as lethal as his legendary intellect, Holmes will battle as never before to bring down a new nemesis and unravel a deadly plot that could destroy the country. (from MovieWeb.com)

When thinking of the classic tales of Sherlock Holmes, it isn't natural for names like Guy Ritchie, Robert Downey Jr. and Jude Law to come to mind in association. That is, until now. 2009 sees the return of the famed detective to the big screen, reinventing the beloved character for a new generation. Ritchie fashions the Holmes world for much more of the MTV type of audience. Although this isn't exactly the unashamedly modern approach that a film like A Knight's Tale took, Holmes has become not only a brilliant mind, but also some sort of action hero. But does it work?

The acting brilliance of Robert Downey Jr. singlehandedly makes this latest incarnation of Holmes a success. Downey is especially convincing as the detective, and his charm, humor, and intensity make the character a joy to watch any time he's on the screen. Holmes is probably most widely envisioned as a high class, no-nonsense master of deduction, so picturing such a character as an unkempt eccentric artist with bad drinking habits, a fierce right hook, and no tact seems far-fetched. Ritchie and company take small, little known traits about Holmes from Sir Arthur Conan Doyle's writings and expands on them - like his fighting talents. It all adds up to a much more contemporized version, something you would never have seen earlier in the 1900's when Sherlock was first depicted on screen. Also, Ritchie's filmmaking techniques aren't exactly "classic" either. Much of the look and feel of the film is the stuff you'd find in any given action movie. So Ritchie's Sherlock Holmes is a bit schizophrenic. It's a marriage of classic storytelling and characters with the popcorn moviegoer mind set. It's not nearly as drastic as updating War of the Worlds, but this Sherlock Holmes is certainly targeted at those who took to Downey as Iron Man (and the trailer to the pending sequel was without surprise attached to this movie in the theaters). 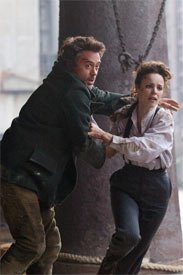 In this particular Sherlock Holmes mystery, we find the detective facing the occult head-on. The end result introduces some very spiritually disturbing moments in the film. Of course Holmes is out to disprove the validity of the dark Satanic threat, but the mystery elements of the story can get pretty unsettling. For those especially concerned about this kind of content - which includes a "dark lord" holding an evil ritual and causing the gruesome deaths of several victims, images of pentagrams and other magical symbols, and a book of spells - you may want to read the following spoiler. For those who want to be surprised and not know an important plot element, please skip the rest of this paragraph (SPOILER ALERT: despite all of the supernatural and demonic elements of the Lord Blackwood character, we do learn that all of his "magic" was exposed by Holmes as elaborate tricks and were not the works of demonic miracles of sorts. Everything was given a practical explanation. END OF SPOILER ALERT)

Violence is probably the biggest red flag for Sherlock Holmes. We see several fist fights and such throughout the film, two of which feature Holmes planning out brutal takedown assaults which show the punches and hits to his victims in slow motion as he describes what will happen -- for example: broken jaw, dislocated jaw, broken ribs, a punch to the liver, etc. After we see this occur in slow motion, we then see Holmes carry out the attack at regular speed. Other things include a man being boiled to death in his bathtub, a man catching on fire and falling out a window to his death, two different hangings, some assorted bloody scratches and cuts on characters, some butchered pigs in a slaughterhouse, and the worst being a bloody, slightly gory shrapnel wound on a person's neck and back. There is also a brief sensual scene where Irene kisses Sherlock before he passes out and later wakes up naked and handcuffed to a bed with only a pillow covering his crotch.

Despite the over-contemporization of the filmmaking style (slow motion, lots of action, quick edits, and the overall tone of some sequences), the latest take is a pretty fun one. And despite Downey already being a bit old to be launching a possible new franchise (alongside the already successful Iron Man series), he makes a great Holmes, and I kept thinking how fun it was to see him play the character -- and am hoping he'll do so again in future films. Law also gives a delightful unique spin on Dr. Watson, and the two make a pretty fantastic team. The dialogue (co-written by a couple fairly newcomers along with an experienced action writer) is rather solid as well, giving Downey and Law plenty of memorable moments to work with. The action sequences are entertaining as well, even if it still feels a bit odd for such a film. It probably will take a bit for those familiar with older renditions of Holmes to wrap their heads around an action packed version, but in the end, Downey Jr. makes Holmes shine bright, and Ritchie's efforts are rewarding.

Those looking for a successful action/mystery blend will find a lot to like about the latest Sherlock Holmes... as long as they don't mind it being packaged as such, that is. Moviegoers who are sensitive to spiritual topics will want to proceed with caution before screening the latest Holmes, though. From the opening scene which involves a foiled human sacrifice to many other mentions to cults and black magic, etc, the film has a dark tone for its central villainous plot that will certainly be unsettling to some viewers (luckily, it does have a redemptive finish, and those interested in more details should read the spoiler alert earlier in this review). Otherwise, Ritchie's latest is a great time at the movies and a wonderful rebirth for the beloved super sleuth. I look forward to more adventures of Downey and Law as Holmes and Watson.

Sex/Nudity: We see Irene in her bathrobe/wrapped in a towel. She then walks away from the camera, removing it and giving us a full view of her bare back as she is presumably entirely naked. We then see her from the front, shoulders-up as she dresses; Irene and Holmes kiss and he then passes out. We later see him lying on a bed, handcuffed to it completely naked, with just a pillow covering his crotch. A maid walks in and he tells her that the key to his freedom is beneath that pillow (and she freaks out -- it's played for laughs). Later, in the credits we see an image of that scene again

Alcohol/Drugs: Holmes smokes a pipe and is drunk or drinking in several scenes. In one sequence where Holmes appears especially delirious, Watson comments that the detective has been drinking a medicine that is not only not for drinking in excess, but is for operations (or something like that)

Blood/Gore: We see some blood on Sherlock's mouth after a streetfight and later some blood on his shirt; We see some maggots on a dead person's face a few times (the face just looks discolored as the body has not been dead that long); We see some dissected frogs and the image of a cut open frog in a flashback; We see a slaughterhouse with decapitated pig heads on tables and the rest of the body hanging upside down (it's kind of gross). We then see a large blade explicitly slicing through the hanging pig bodies. We also see other pieces of raw pig meat; A man has a sort of gory wound on his neck and back after an explosion; We see some bloody scratches on a woman's face; A man is soaking in a tub and the water apparently starts to boil and then kills the man inside. We see a couple glimpses of the man's face turning dark colors as he dies; Holmes snips the tail off a dead rat

Violence: Lots of hand-to-hand fighting, including slow motion shots of punches being landed to parts of the body that cause various injuries. We see the flesh slowly reacting to such punches as well; People shoot at each other; A large explosion happens, wounding people; We see a woman on a table during a dark ritual and she makes a motion to grab a knife and kill herself but is stopped; A man catches on fire and falls out a window to his death; A person boils and drowns to death in a tub; We see a corpse inside of a coffin; We see a person get hanged (with a bag over their head); We see a person get tangled up in chains and get hung to death; A person falls a distance but is okay; Two people struggle with a large man; And other assorted violence