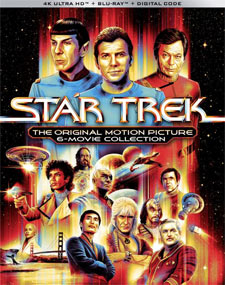 
Last year, to celebrate 55 years of the Star Trek franchise, Paramount Pictures released a 4-movie, remastered 4K collection of the first four Star Trek movies. Now, a year later, Paramount assembles all 6 original theatrical movies into one collection, including the fan-favorite "Director's Edition" of Star Trek: The Motion Picture which makes its HD and UHD debut. The first Star Trek movie came to the big screen in 1979 following the smash success of Star Wars in 1977, which rekindled interest in the cancelled sci-fi TV series. Here is a short assessment of this collection as a whole, but for the full, more detailed reviews for each movie, please visit the links above.

To date, there are 13 Star Trek movies, including the reboot/prequel/sequel movies from 2009 - 2016. (There's still talk of a fourth in that series, but it's still yet to come together.) Those newer movies are all available now in 4K UHD, but this Star Trek: The Original 6-Movie Collection set is the first time that the first six films have been converted.

I watched the Star Trek: The Motion Picture - Director's Cut for the very first time with this collection. I have seen the theatrical edit a couple times, but this Director's Cut made its debut on DVD in 2001 as director Robert Wise's definitive edit of the movie. Honestly, I couldn't tell much of a difference from the other cut of the movie. I did a search online for what exactly is different about the two cuts, and apparently the special effects have just been improved a bit. For example, San Francisco on Earth is given way more detail, while planet Vulcan looks much more like what one would expect the planet to look like (it actually lines up with the design of the 2009 reboot's version of Vulcan, too). Some of the space fight and explosion effects have been improved, too, but other than that, I don't think too much is different with the film. And so, if you don't care for the 1979 film, this newer edit isn't likely to change your mind. It's still very long, very dry, and almost entirely lifeless. It's great seeing the original series gang on screen for the first time since the show went off the air, but it's still not a good movie. It's easily my least favorite of all of the Star Trek movies.

With that said, the rest of the Star Trek movies here are great - and make the transition to 4K UHD quite well. The Wrath of Khan, The Search for Spock, and The Voyage Home make a great trilogy of Trek films, but it's an incomplete journey without the 5th and 6th films. New to this set are those two movies, completing the big screen adventure of the original USS Enterprise crew. Star Trek V: The Final Frontier is considered to be one of the lesser Trek entries, but it's still not without its merits. But the far superior Star Trek VI: The Undiscovered Country concludes the series on a high note.

If you're a diehard fan of Star Trek and have been itching for these movies to get the 4K treatment, this is the definitive release for the first 6 movies. And who knows how much longer studios will be making physical media. This set does come with a 4K UHD digital copy of each movie, too, and if you've already purchased these movies digitally on an outlet like iTunes, you likely received a free upgrade of the HD to 4K UHD on release day of this set. I'm hoping we'll see upgrades to the Next Generation era films soon, too!

- John DiBiase, (reviewed: 9/5/22)
Disclaimer: All reviews are based solely on the opinions of the reviewer. Most reviews are rated on how the reviewer enjoyed the film overall, not exclusively on content. However, if the content really affects the reviewer's opinion and experience of the film, it will definitely affect the reviewer's overall rating.